A £200,000 milestone and Silver Award for fundraising heroes RIFT Group 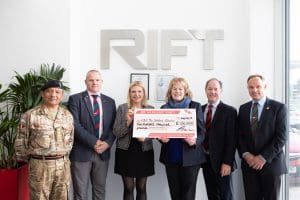 We are delighted to announce that RIFT  Group have reached the incredible total of more than £200,000 in contributions towards our work supporting soldiers, veterans and their families in times of need.

We are proud to have a near four-year history of working with tax refund experts RIFT Group as part of their commitment to the Army family. In recognition of their outstanding work, RIFT received a Silver Award from the Armed Forces Covenant Employer Recognition Scheme, which acknowledges employers that have provided exceptional support to the Armed Forces community.

To celebrate this double achievement, RIFT brought together employees, local military, reservist and cadet units, who heard from our ambassador Martyn Gibbons MBE. Martyn, formerly of The Royal Regiment of Fusiliers, served for nearly 17 years before being seriously injured during his second tour of Afghanistan. Over the years our charity has given Martyn and his family a number of grants to support them through difficult times whilst Martyn battled to regain the use of his legs. Martyn now works at a local secondary school as a mentor and the family are passionate supporters of ABF The Soldiers’ Charity. 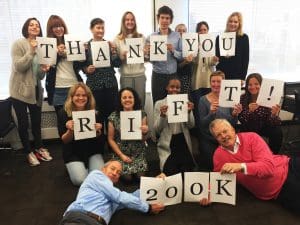 Jan Post, Founder of RIFT, said: “We are delighted that RIFT have now contributed over £200,000 towards the vital work of The Soldiers’ Charity. As many of our tax refund clients work in the Armed Forces, it’s fantastic to strengthen the commitment we make to the military community through our partnership. Hearing from inspiring individuals like Martyn who have benefitted from support really brings homes the importance of what we do together.”

Brigadier (Ret’d) Robin Bacon, Chief of Staff at ABF The Soldiers’ Charity, adds: “It’s fantastic to hear that RIFT has reached such a significant target. They have been an inspirational and committed partner over the years, enabling us to go on providing the sort of tailored assistance that is of such benefit to soldiers, veterans and their families. We thank them for their excellent work.”

To find out more about RIFT’s commitment to the Armed Forces, visit www.riftrefunds.co.uk.