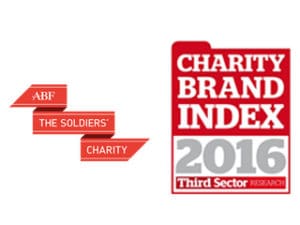 In the latest Third Sector Charity Brand Index (CBI), which gauges public awareness of the charity sector, our Charity, has come top in a number of categories. The Charity was ranked number one for ‘using its money well’, and for ‘delivering on its promise’ – to support soldiers, veterans and their immediate families – out of the top 154 charities in the UK.

The CBI is based on a survey of more than 4,000 people across the UK and features every major charity, including the top seven military charities, with Macmillan Cancer Support named as the top charity brand.

Brigadier (Ret’d) Robin Bacon, Chief of Staff ABF The Soldiers’ Charity comments: “It’s very encouraging to have continued public faith in the way that our Charity operates and delivers vital support. Being named as the number one charity for delivering on promise and for using its money well demonstrates to our supporters that they can trust us to steward their donations carefully to assist those soldiers, veterans and their families who may need our help. We are extremely proud to be recognised for this.”

Receiving more than £22million in annual donations, the results show the Charity is ensuring that the 5,000 individuals and up to 80 specialist charities it also supports receives the dedicated help they need.