Our history: 75 years of service

In 1944, around 3 million British soldiers were still at war, notably in France, Italy and Burma. But as the tide of the war began to turn, the Army Board in London was compelled to consider the welfare of its service personnel after peace was won. The mandate was clear: to protect the current generation of soldiers from the hardships endured by those returning from the First World War, a generation earlier.

On 28th February, Secretary of State for War Sir James Grigg placed between Winston Churchill’s War Cabinet a memorandum calling for a national charity for the British Army. This charity would mirror the work of the other Service benevolent funds by providing financial assistance “to the serving soldier and his dependents.” On 28th May – mere days before D-Day – the cabinet approved the scheme. As The Times noted: “The Fund for the Soldier” is “an object none can question because the soldier is what it’s all about.”

The Army Benevolent Fund came into being on 15th August 1944, with HM King George VI as Patron and Field Marshal Lord Cavan as President. In its first year, the charity received a generous £1.5m injection from the NAAFI profits, enabling it to initiate its grant giving activities and begin to offer a lifetime of support to soldiers, veterans and their families. In 1946, the charity launched its first appeal, fronted by WW2 hero Field Marshal Montgomery.

Since 1944, the charity has helped millions of people and grown into a national organisation that strives to maintain the same respect and trust as the Army it supports. ABF The Soldiers’ Charity has a remarkable record of responding to the needs of soldiers and their families involved in all the campaigns and wars of the last century, with special funds for those who served in Northern Ireland, the Falklands, the two Gulf Wars and Afghanistan. 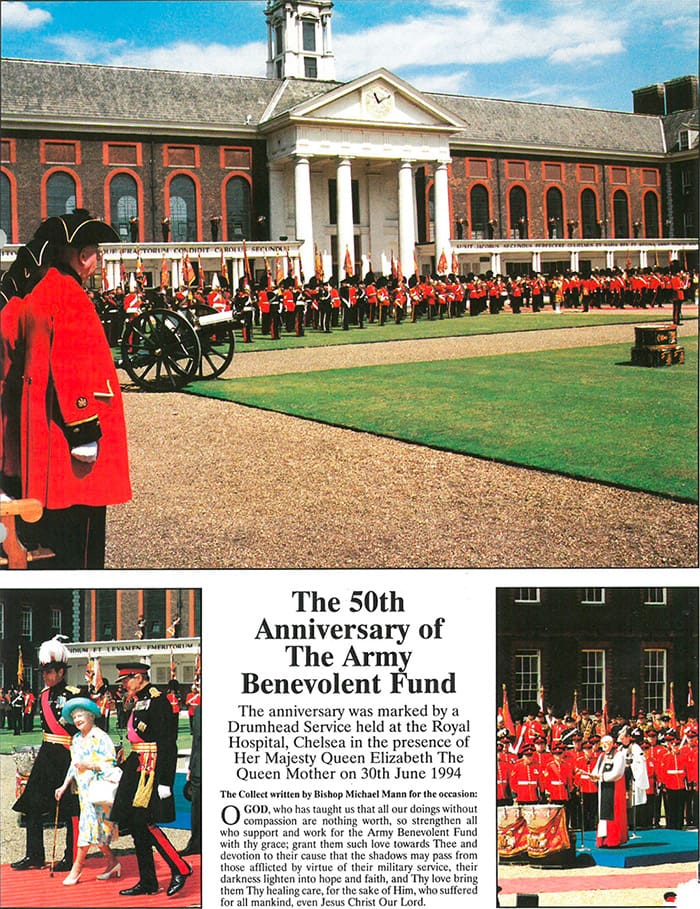 Until March 2007, the charity’s Head Office was at 41 Queen Anne’s Gate, London, after which it moved to more modern, open-plan offices in Mountbarrow House in Victoria to co-locate with The Officers’ Association. In 2011, with the expansion of the Head Office, more space was leased in Mountbarrow House and the charity now co-locates with seven other Service charities.

In February 2010, the charity was re-launched and re-branded as ABF The Soldiers’ Charity. The Controller became the Chief Executive and the charity underwent an ambitious expansion scheme. The charity subsequently became an Incorporated Charity in March 2012.

In 2019, the charity is celebrating 75 years of service for soldiers, veterans and their families. While there is a British Army, there will be The Soldiers Charity.