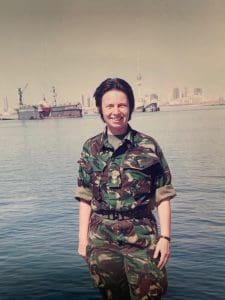 She has worked with ABF The Soldiers’ Charity for eight and a half years, following a successful career in the Army where she broke the glass ceiling of appointments open to female officers – giving greater opportunities to them in the future. She was commissioned into the Army in 1979, serving for 32 years in the UK and Germany and undertaking operational tours in Northern Ireland, Bosnia and Kosovo. Whilst in Northern Ireland, Helen was Mentioned In Dispatches and later received an MBE for her services.

As a Lieutenant Colonel, Helen undertook logistic plans for the deployment of troops to the Middle East and Afghanistan – a role that involved trips to Kuwait, Tajikistan and USA. Following her promotion to Colonel, Helen was Commander Logistic Support, responsible for logistics and Royal Logistic Corps personnel for 4th Division in southern England, Brunei and Nepal. Helen’s final tour in the British Army was selecting civilians for officer training at RMAS Sandhurst.

Helen describes her career as “fascinating, interesting and full of challenges, with huge job satisfaction.” Of her work at The Soldiers’ Charity, she says, “As a veteran I am passionate about The Soldiers’ Charity and all that it undertakes. The charity has been around for 75 years and will be here for many years to come, supporting soldiers and their families in time of need.”