A former soldier is walking 100km before Remembrance Day to raise money for the ABF The Soldiers’ Charity, just nine weeks after being discharged from hospital following open heart surgery.

49-year-old Jason Horton-Smyth from Earls Colne suddenly became unwell while out running and underwent open heart surgery at Basildon Cardiothoracic Centre in June. He returned home to recover but his health deteriorated and he was re-admitted to hospital in July.  Tests showed that he had contracted E-coli and the wounds from his surgery were failing to heal.

The E-coli proved to be multi-drug resistant and Jason’s condition continued to deteriorate with him losing four stone in several weeks. Eventually, a successful treatment was found and, just weeks after discharge from hospital, Jason decided to undertake a physical challenge whilst still in cardiac rehabilitation.

On 1st October he began a challenge for ABF The Soldiers’ Charity, which will see him walk 100km between now and Remembrance Day – the equivalent of walking the Western Front during the First World War. 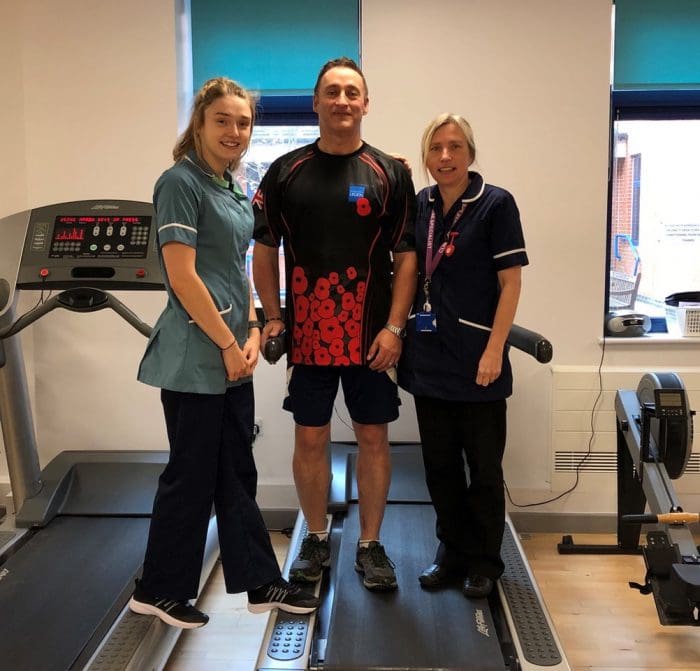 The Virtual Frontline Walk takes place in commemoration of those who fought in the First and Second World War and raises money to provide a lifeline to soldiers, veterans and their immediate families when they are in need. The Army Benevolent Fund, as it was known then, was founded in 1944 to ensure that solders returning from the Second World War were well cared for.

Jason was a soldier for 24 years, serving in the Royal Electrical and Mechanical Engineers. He served in Germany, Bosnia, Kosovo, Northern Ireland and Iraq multiple times before leaving the Army in 2010 to become a police officer.

Jason said: “Maintaining my fitness throughout my career has always been important to me, so when I started getting pain in my arm when I was running, I wasn’t immediately concerned. Eventually my wife nagged me to get it checked out and I was amazed to find out that I required a double heart bypass. It was a total shock.

“I was sent home to wait for the surgery but, unfortunately, I became very ill one night and was rushed to Colchester Hospital where I remained for almost a month before I was transferred to Basildon for surgery.

“I have been desperate to get back out there and build my fitness back up again, but I have to take it slowly, while my heart heals – so walking 100km before Remembrance Day and raising money for ABF The Soldiers’ Charity while doing so, seemed like the perfect opportunity. The Wound Clinic at Basildon Cardiothoracic Centre and the Cardiac Rehab Team at Colchester Hospital have been incredible and very supportive in helping me get to the point where this is possible so soon after my surgery.

“I think The Soldiers’ Charity is an amazing charity which supports soldiers and their families with huge life changes through to small things which mean a lot to a group who are notorious for struggling to ask for help. We like to think we are a self-sufficient lot, us soldiers!”

Jason is doing the challenge with his wife who he met in the Army. Rachel Horton-Smyth worked for the Ministry of Defence and, not long after they met, took up a role in Afghanistan while Jason was posted to England. They both left their roles with the military to be able to spend time in the same country. On leaving the Army, Jason and Rachel were invited to the Queen’s Garden Party at Buckingham Palace to recognise their service to the Armed Services.

If you would like to support Jason and Rachel their fundraising page can be found here: https://virtualfrontlinechallenge2019.everydayhero.com/uk/team-jr