This December, join us for a stunning carol concert with wonderful performers and well-known readers. The concert is set to be a remarkably well-attended event, showcasing why our community and this County hold our military in such high regard.

VIP TICKETS ARE SOLD OUT

Please see the details for The Salisbury Carol Concert 2019 via the Playhouse website tickets from £22 – £35. https://www.wiltshirecreative.co.uk/whats-on/we-also-sell-for/salisbury-cathedral-carol-concert-sp72601/. The VIP tickets and £35 -SOLD OUT 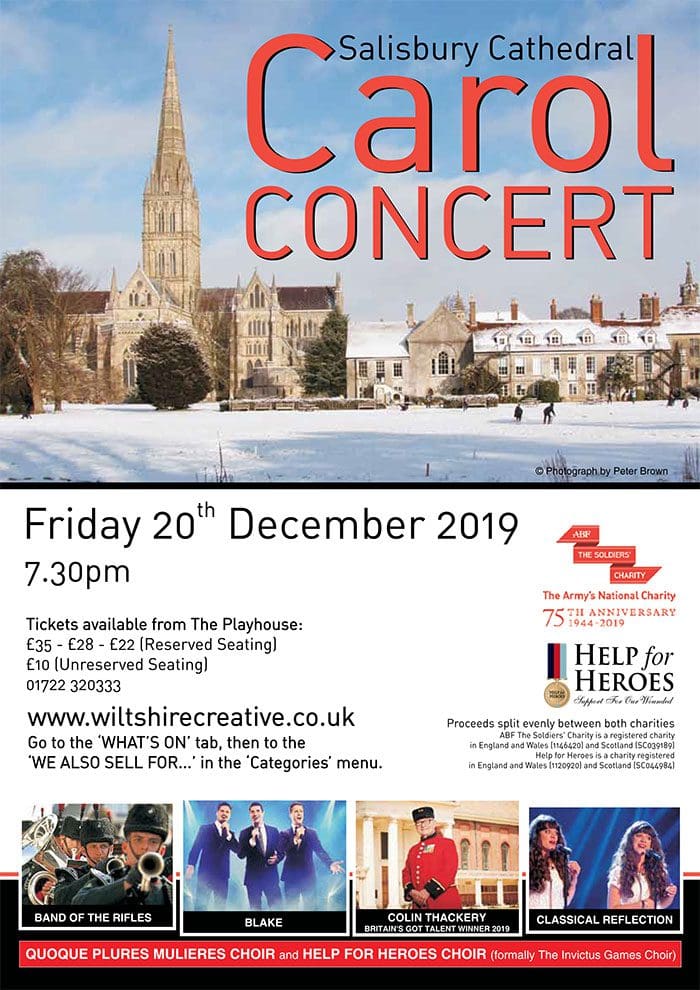 Tickets for the Cathedral Concert only are £22 – £35. These can be purchased from the Playhouse website here. Tickets will be sent to you directly.

Performing during the evening are:

BLAKE: Ollie Baines, Stephen Bowman and Humphrey Berney
Renowned for performing classical and pop songs in stunning harmony vocal arrangements, BLAKE comprises three young men who enthral fans the world over with their amazing singing, hit albums and charismatic stage presence. With over a million albums sold, No. 1 hits in ten countries and nearly 150 TV appearances around the globe such as: Strictly Come Dancing, The Graham Norton Show, BBC Breakfast, The David Walliams Show, ITV Daybreak, NBC America, The Today Show, Sir David Frost ‘Around the World’, The One Show and more, BLAKE continues to build its reputation as one of today’s most eclectic and exciting classical ‘crossover’ groups.

COLIN THACKERY:
89-year-old Chelsea Pensioner, Colin Thackery wins Britain’s Got Talent 2019 and is the oldest person to ever sign a record deal with Decca Records. Colin served in the Royal Artillery for 25 years and was married to his late wife Joan for 66 years before moving in the Royal Hospital in Chelsea. Britain’s Got Talent judge and music executive Cowell said: “I could not be more thrilled that Colin, who won Britain’s Got Talent this year, has signed to the same label as Dame Vera Lynn. Colin is an inspiration to us all.”

CLASSICAL REFLECTION
Naomi and Hannah Moxon are identical twin sopranos. At 24 years old, Naomi and Hannah have performed in some of the UK’s most prestigious venues including headlining at The Royal Albert Hall three times, where they performed for HRH The Duke of Kent. They have also independently released multiple albums and singles; their most recent release: ‘ECHO’ reached number 3 in the Official Classical Charts and played on both Classic FM and BBC Radio stations. This year, Classical Reflection was nominated at the Classic Brit Awards.

THE HELP FOR HEROES (FORMERLY INVICTUS GAMES) CHOIR:
The choir was set up ahead of the second Invictus Games held in May 2016. It came together just two months previously under the extraordinary inspiration and assiduous guidance of world renowned choirmaster Gareth Malone for his latest TV show, a two-part BBC documentary.

THE BAND OF THE RIFLES:
No concert such as this would be complete without input from some of the British Army’s incomparable military musicians. The Band of the Rifles is based at the poignantly and appropriately named Sir John Moore Barracks in Winchester, Hampshire and is part of the Corps of Army Music. The band maintains traditions that date back over 200 years, including the use of the silver bugle and the distinctly fast marching speed

LESSON READERS
Some well-known people have kindly agreed to deliver the lessons and other readings, including internationally acclaimed best-selling author, Lord Archer.