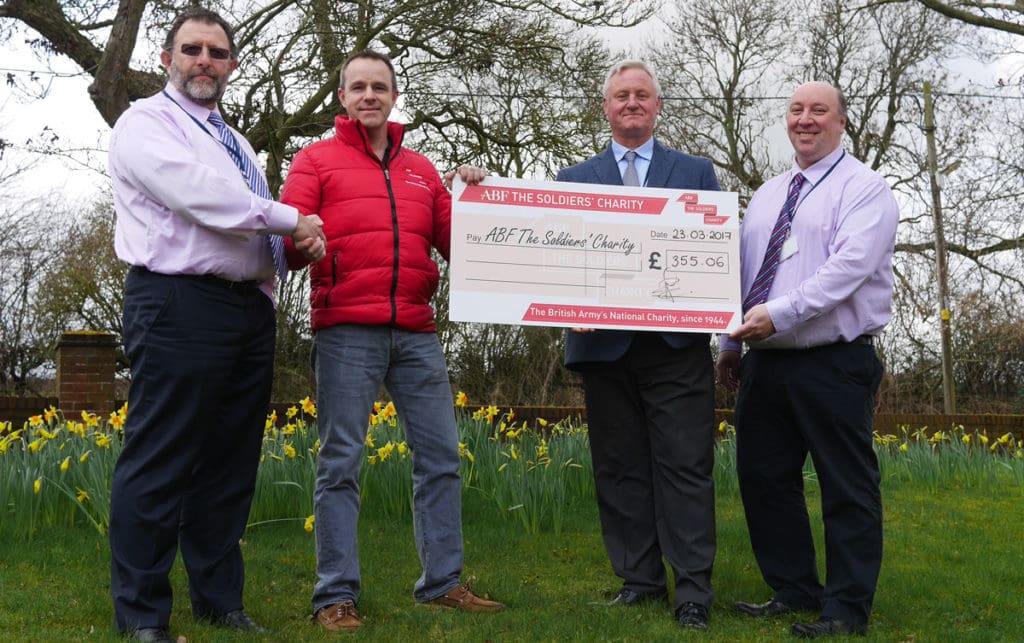 Durham based charity Finchale’s CEO, Mel Pears MBE, presented a cheque for £355.06 to Lieutenant Colonel Barnbrook, Regional Director North East of ABF The Soldiers’ Charity, at a ceremony at Finchale’s site in Pity Me on Thursday 23rd March 2017.

Finchale has worked with The Soldiers’ Charity over the past 2 years to provide tailored support to veterans from the North East of England to enable them to move from social exclusion to sustained employment.

Every year, thousands of individuals, groups and businesses across the UK raise much needed funds for The Soldiers’ Charity by hosting a “Big Curry” event and Finchale hosted their first in October 2016 which saw over 50 people attend.

Mel Pears MBE, CEO at Finchale said: “Everyone at Finchale really enjoyed helping raise money for a cause so close to our hearts, taking part in The Soldiers’ Charity’s ‘Chilli Cookie Roulette’ and even filming our very own #MannequinChallenge! I’m delighted to be handing over this cheque to Lieutenant Colonel Barnbrook today and we look forward to hosting another Big Curry lunch event later this year at Finchale.”

Lieutenant Colonel Barnbrook, Regional Director NE said: “I am thrilled to accept the cheque on behalf of The Soldiers’ Charity from Mel and the team at Finchale. The Charity benefits greatly from working partnerships with like-minded organisations across the North East region and all proceeds will go directly to support soldiers, veterans and their families who are in need of our assistance. Last year The Soldiers’ Charity gave grants to nearly 5000 individuals and 88 specialist charities, like Finchale which support the wider Army family. We are always grateful for their support.”