We spoke to Major General Sir Martin White and Colonel Wayne Harber about the multi-faced role of logistics in planning and executing Operation Granby.

Both had leading roles during the operation – Major General White as Commander of the new logistic formation, the Force Maintenance Area (FMA), and Colonel Harber as Deputy Chief of Staff. 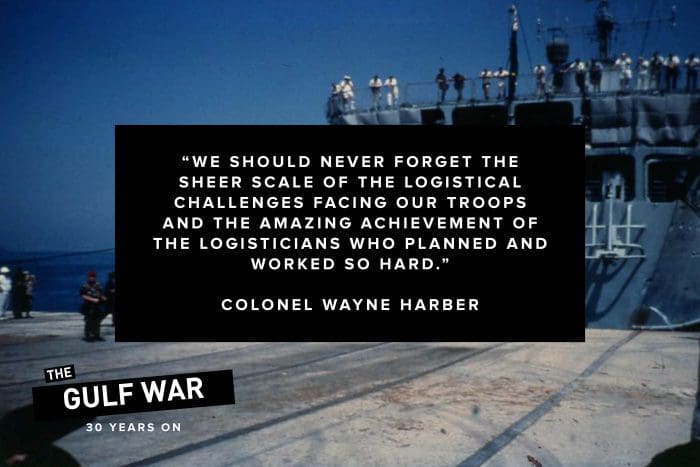 A conflict in a distant land

This year is the 30th anniversary of a short but intense war in the Middle East that depended on our military logisticians getting it right. Wayne explains: “Operation Granby saw Britain’s Armed Forces rise to the challenge of fighting a conflict in a distant land, where everything required to prosecute the war had to be moved from the UK and Germany across 4,000 miles of sea lanes to the port of Jubail in Saudi Arabia.

“400,000 tons of freight were moved, requiring 146 cargo ships. Some 12,000 air lift sorties were flown, amounting to considerably more than the entire effort of the Berlin airlift.”

After managing to overcome the inconceivable task of moving 7th Armoured Brigade (“The Desert Rats”) with all its heavy equipment optimised for Europe into the Middle East within a few weeks, there was no time to rest.  Sir Martin White says: “It was all a bit hectic, but then that sort of improvisation is what the Army is good at, as we only had a very few days to earmark and gather the units and mass of equipment together.” 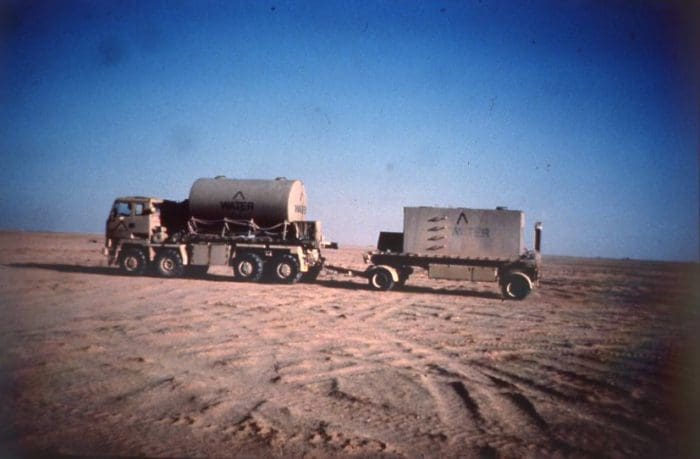 Wayne continues: “Placing these resources in theatre was only the beginning of the problem. Once they had arrived, they had to be sorted and allotted to the right portion of the front, bearing in mind that servicemen and women were spread across 2,000 miles of desert in four different countries, with internal supply loops of more than 400 miles over unfamiliar and hostile terrain – not to mention the threat of chemical or biological attack.” 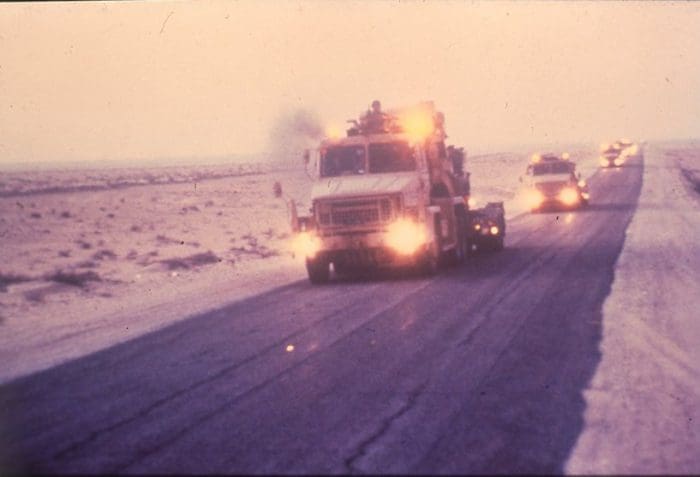 Wayne explains: “Initially, 7 Armoured Brigade was deployed from Germany as part of Operation Desert Shield with the newly-formed FMA logistic headquarters responsible for the reception of the Brigade into theatre and its support thereafter. Their logistic support responsibilities covered all aspects of the administration, transport, supply, maintenance and medical requirements for the British force in the Gulf. Vehicles arriving by sea were unloaded by Port Operators and were married up with personnel arriving by air as quickly as possible so they could deploy into the desert. Soldiers waiting to go forward were accommodated in a vast portside shed, Shed 13, built by the Royal Engineers.”

Wayne says: “While the focus of attention will always be with the fighting men and women who engage with the enemy, we should never forget the sheer scale of the logistic challenge facing our troops and the amazing achievement of the logisticians who planned and worked so hard, at risk, to ensure the conflict could be supported for as long as it took to defeat Saddam Hussein and his forces occupying Kuwait.” 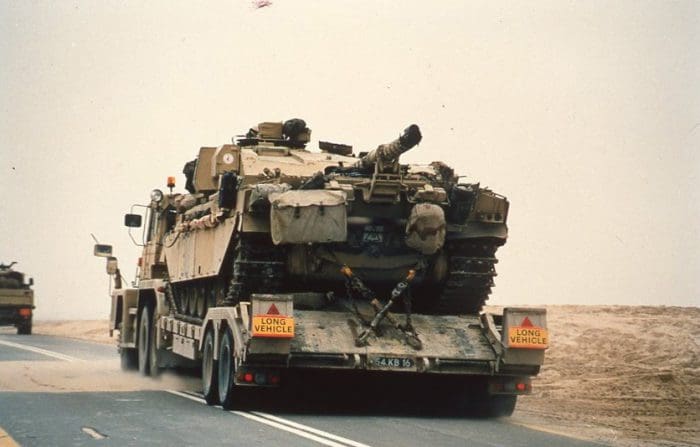 Sir Martin adds: “We all felt part of an important undertaking where the training, quality and resilience of the individual British soldier was once again demonstrated.”

The FMA was in need of its own emblem. In a nod to the famous British sitcom, they selected the insignia of a blackadder after being stationed in ‘Baldrick Lines’ and Sir Martin’s daughter asking in her letters if he had ‘a cunning plan’. Today, although the successor to the FMA is 101 Logistic Brigade, the blackadder insignia badge still remains.

Wayne says: “With the later arrival of 1st (UK) Division from Germany and a decision to move over 300 kilometres North West into the desert for offensive operations, the British land component would increase to some 20,000 personnel, 7,000 vehicles and 72 aircrafts, all of which had to be received and supported by the logistic units. The subsequent move of the Division forward for battle involved a major logistic effort, in-loading stocks to a forward supply base over 200 miles from the port, as well as moving tracked vehicles on transporters, all on the Tapline Road, the one and only, mostly single lane, road available for everyone to use, that included the American, French, Syrian and British armies and the local population. The conditions were truly awful and, sadly, three soldiers died during this phase of the operation in traffic and other accidents.”

As the FMA prepared for the 100-hour land battle, Sir Martin looks back at this tense moment, saying: “I watched the first vehicles start out along the single-track route known as the Tapline Road on 3rd January. Time was very tight, the road was crowded with other nations also deploying, the weather was wet and the threat from Iraq remained real.” 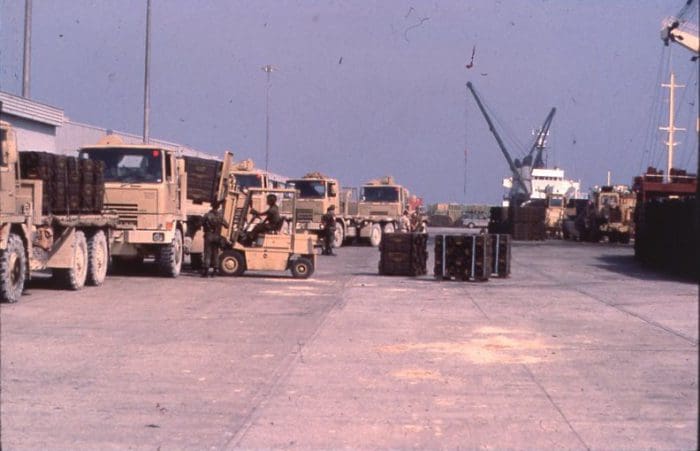 By the time the war ended, the Division had fired just over 1,600 tank rounds, 8,500 rounds of artillery and 2,000 rockets. They had consumed 10,000 litres of fuel per kilometre and 300,000 litres of water per day. By contrast, in the Second World War, a Division’s average consumption was 100 tons per day, while in the Gulf War it was 1,000 ton per day. But the human cost is the most important aspect of any war and those who made the ultimate sacrifice must never be forgotten. Overall, 47 personnel were killed and many more wounded, while there were some 7,000 Prisoners of War who also needed support. This was, like all operations for the British Armed Forces, a life-changing experience for those who took part. It was also a war where logisticians played a central role in its success.

At the time, Prime Minister John Major promised that “we’re going to get everyone home as quickly as we can.” It was one task to transport vehicles, ammunition, fuel and supplies from Europe to the Middle East, but another to bring it all back after the war. An organisation was set up in Germany and deployed to the Middle East to manage the return of all the soldiers and equipment so they could finally feel the relief of being back on home soil.