30 years ago, Britain fought as part of a coalition of 35 nations to liberate Kuwait from Iraqi control. Lasting from 1990 to 1991, it was a short war that cast a long shadow.

Known variously as the Gulf War, the Persian War or the First Gulf War, the conflict saw the largest single deployment of British troops since World War Two. Altogether, some 35,000 British service personnel and 13,000 vehicles were deployed.

Background To The Conflict

The Gulf War started when Iraqi President Saddam Hussein invaded the tiny, oil-producing country of Kuwait on 2nd August 1990. This was set against a backdrop of deep-seated historic tension in the region. In an incendiary speech, Saddam Hussein accused neighbouring Kuwait of conspiring with Saudi Arabia to over-produce oil and drive down prices, costing Iraq billions in lost revenue. In addition, Iraq had never recognised Kuwait’s independence, claiming it to be an artificial state carved out of the Iraqi coast.

The invasion was met by international condemnation, with Saudi Arabia and Kuwait turning to Western allies for support. Many in the West feared that Iraq’s next move would be to invade Saudi Arabia and seize control of the region’s oil supply.

With tensions growing, US President George Bush called for a multi-national force to oppose Saddam Hussein as part of Operation Desert Shield. On 8th November, he obtained a UN Security Council Resolution setting a deadline of 15th January 1991 for Iraq to withdraw unconditionally from Kuwait.

In total, a US-led coalition of 35 nations fought against Iraq, including troops from the UK, Saudi Arabia, France, Egypt and Syria.

The UN deadline passed and Iraq refused to comply. The following day, the coalition launched devastating air attacks against military, economic and communications targets in Iraq and Kuwait. The air campaign devastated Iraqi divisions that were deployed in the open desert and interrupted Iraq’s supply chains.

Kuwait City was recaptured on 26th February. As they retreated, the Iraqi Army set fire to over 500 oil wells as a final act of destruction. This caused huge smoke plumes and terrible environmental damage.

During the campaign, 345 coalition troops were killed and 1,000 wounded. Exact Iraqi casualty figures are not known, but number at least 30,000.

US President George Bush declared a ceasefire on 28th February, informing the world that Kuwait was liberated. On 3rd March, Saddam Hussein agreed to abide by all of the UN Resolutions. This included recognising Kuwait’s sovereignty and destroying its own weapons of mass destruction.

The Legacy Of The Gulf War

The Gulf War was declared a decisive victory for the coalition, though some argued that the US should have pursued the war until Saddam Hussein was overthrown.

For the next 12 years, Saddam Hussein would continue to defy UN Resolutions and arms inspections, paving the way for the 2003 Iraq War. 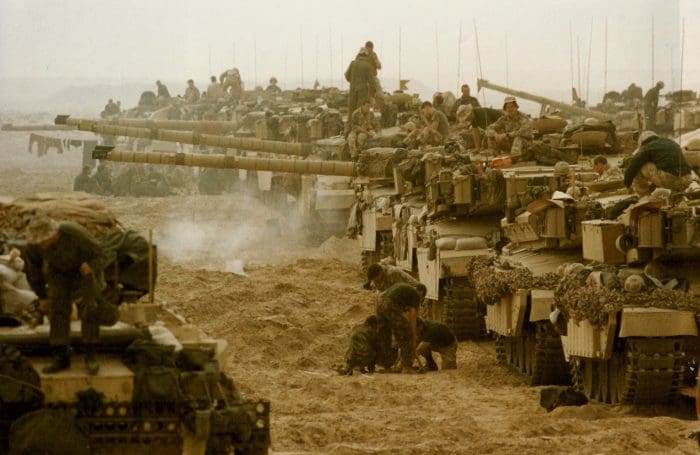