How our ongoing support impacts veterans in Scotland

We are proud to continue our partnership with Erskine Homes, a provider of extensive care, therapy and accommodation for veterans across Scotland.

Last year, we have awarded a £150,000 grant for enhanced care and support services for the Army family, including physiotherapy, speech and language therapy and a varied programme of classes and daily activities. Today, we share a few of the many stories of those who have benefitted from our funding throughout the challenging times posed by the COVID-19 pandemic.

Since arriving at Erskine in 2017, Lilias has been the life and soul of any company. Despite her current age of 94, she has participated in many events from the Fitness for Life programme to the Sporting Senior Games 2019, where she was part of the winning team.

Lilias is a former theatre nurse with 20 years experience in various hospitals. She was married twice, has two sons and lots of grandchildren. Both her late husbands were Army veterans in the Highland Light Infantry and the Royal Army Service Corps. Her second husband, Alexander was also an Erskine resident until his passing.

Aside from sporting interests, Lilias thoroughly enjoys the singing sessions run by the Speech and Language Therapy team and also the Lunch Club. She feels uplifted being in the company veterans and appreciates the care she receives at Erskine Homes.

Charles, 83, known as Chic, came to Erskine Glasgow in 2019 together with his wife of over 60 years, Nancy. 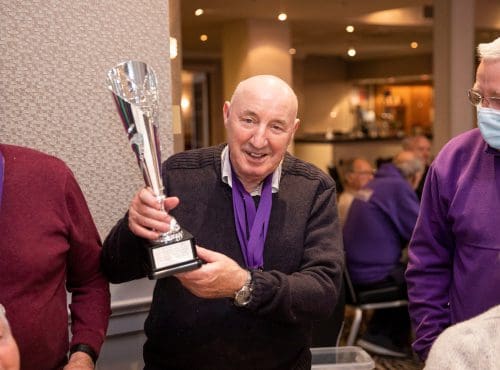 The Glasgow-born veteran enlisted in the Highland Light Infantry aged 18 and was posted to Germany. He enjoyed his three years in the Army but was disheartened when The Highland Light Infantry was amalgamated with the Royal Scots Fusiliers in 1959 to form the Royal Highland Fusiliers. They switched from wearing traditional kilts to sporting tartan trews. For Chic, this was the deciding factor in leaving. He says: “I loved wearing the kilt and I still wear it today.”

Chic then spent six years in the Reserves and dedicated 30 years to working in the city of Glasgow Corporation Parks Department, firstly as a charge hand and then to his final appointment as a Lanscape Manager.

Both keen dancers, Chic and Nancy met in a local dance hall and they went on to have two daughters after getting married in 1965.

In the Erskine Glasgow Home, Charles and Nancy have made many new friends and find great pleasure in the many activities and outings. They particularly enjoy their walks along to the nearby Bingham Pond, where they can relax and watch the wildlife in a peaceful setting.

Bill, 70, came to Erskine in 2020 after he needed extra care due to some health issues.

Bill left school aged 15 and worked in catering until he was 17 when he went to the Army recruiting office in Greenock and joined the Army Catering Corps (ACC).

He says: “I love baking, being creative. My wedding cakes were in great demand!”

Continuing his time with the ACC, Bill was posted in Catterick and Ripon in Yorkshire. He then served on two operational tours in Northern Ireland, where he witnessed frontline service which he recalls as very nerve-racking: “I came home physically uninjured, but it leaves its mark and I must admit it gave me a fright.”

After nine years of service, Bill was discharged from the Army due to being medically unfit. He then had several jobs including working in a steakhouse, running his own ice cream van and working with special needs children. All this time, he was still baking wedding cakes!

Unfortunately, due to declining health, Bill has suffered from slipped discs and a series of small strokes confining him to a wheelchair. He was urged by his family to seek assistance from Erskine, who were able to provide him with physiotherapy, accommodation and care.

Bill says: “The McKellar House staff and Erskine in general is second to none, I don’t know where I would be without everyone here and what they have done for me. The staff are working under extremely difficult conditions and as far as I am concerned, they are out of this world.”

Erskine care for nearly 1,000 residents each year, providing care tailored to the needs of each individual veteran. Since our partnership began many years back, we have awarded Erskine over £1,000,000 in funding to ensure they can continue to carry out the amazing work they do for the Army family.