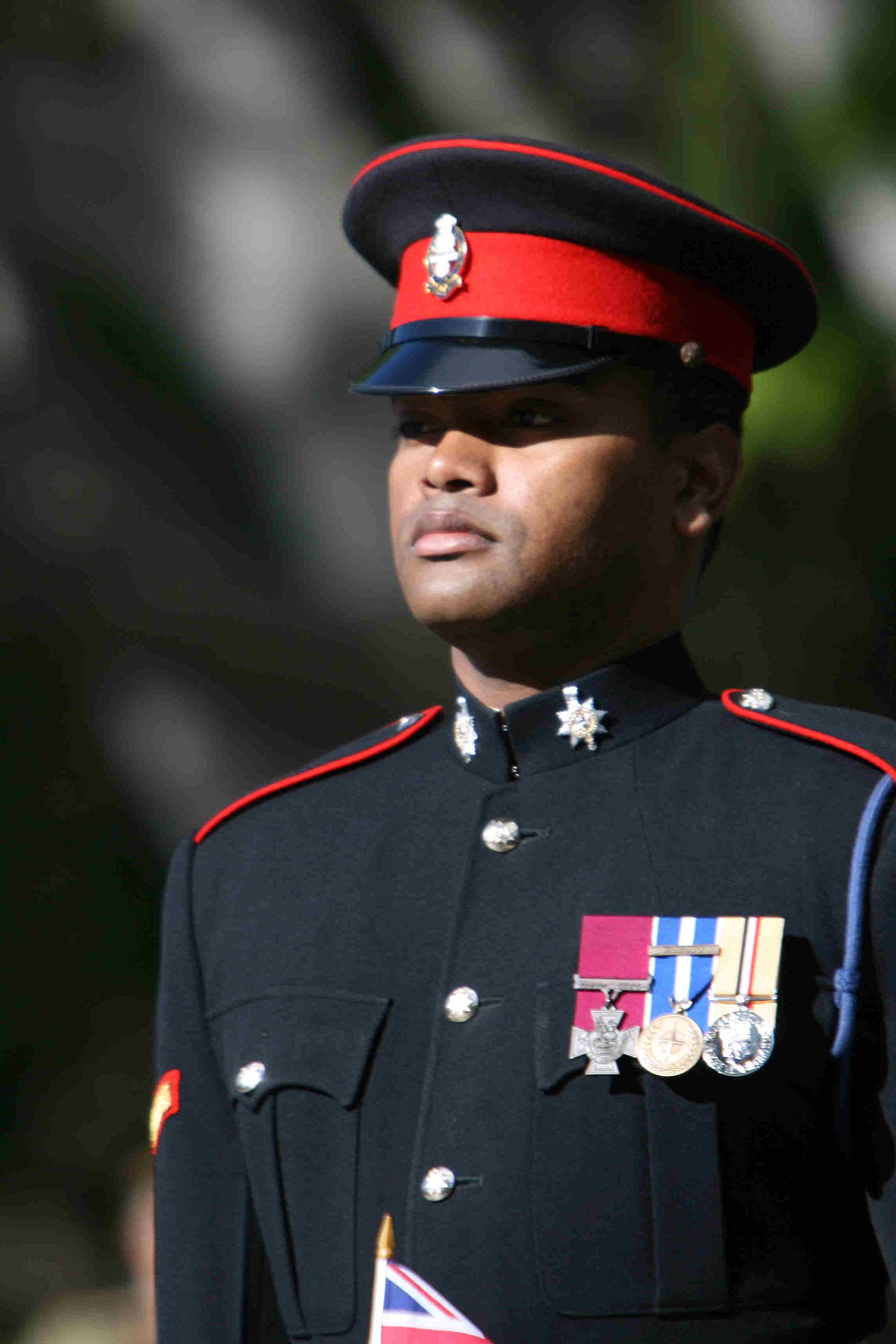 Lance Sergeant Johnson Beharry VC received three standing ovations after his talk at a dinner in aid of our charity at the Farnham Reserve Centre on Friday.

Beharry was awarded the Victoria Cross having carried out two individual acts of heroism while serving in Iraq in 2004, saving the lives of his platoon.

On May 1st 2004 he was driving a Warrior Tracked Armoured Vehicle which was hit by multiple rocket propelled grenades. His platoon suffered multiple casualties resulting in Beharry having to steer his vehicle through the open hatch. With his head exposed to small arm fire, Beharry drove the Warrior through the ambush to safety and still under fire, extracted his wounded comrades.

Just a month later, on June 11th, Beharry was driving the lead Warrior of his platoon through Al Amarah. The platoon were ambushed and Beharry received serious shrapnel injuries to his head and body, having been shot a total of five times and twice in the head. Despite his life-threatening injuries, Beharry drove the vehicle out of the ambush area before losing consciousness.

Beharry said he remembered being shot in the shoulder but “not receiving a bullet in my head”, as he instantly lost consciousness.

He required brain surgery for his injuries, and he was still recovering in March 2005 when he was awarded the Victoria Cross. He is one of just two serving soldiers to receive a Victoria Cross.

During his talk Beharry credited The Soldiers’ Charity who literally “picked (him) up” after he was injured in Iraq in 2004. Having been blown up, taken shots to the head and the rest of his body, Beharry was admitted as an inpatient to Headley Court twice. His medical bills totalled £325,000. He thanked our charity for looking after him and his family both through this difficult time and ever since.

He said: “I couldn’t speak and I couldn’t walk… 13 years on, I am still in pain.” When questioned on the effects of PTSD (post-traumatic stress disorder) Beharry stated “that you live with it 24/7 as small things can trigger it off”.

As Beharry took his seat he received a third, and final, standing ovation. Major Anthony Jaques MC, our chariman of the Farnham Hub said: ‘The dinner was a sell out and now we know why! Everyone wanted to both see and hear Johnson Beharry in the flesh. He made an outstanding speech without any notes and is a great credit to our country and to the Army. He showed great bravery 13 years ago and continues to do so today.”