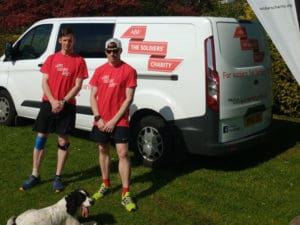 Sergeant Sean Dunbabbin, who is serving at the Army Foundation College in Harrogate, has decided to take on a huge challenge in aid of ABF The Soldiers’ Charity. Running a marathon is no small task for most people, but Sean is taking on nine marathons over nine days!

Six days in to his challenge, Sean is running at Heaton Park in Greater Manchester, today, hopefully finishing no later than 4pm. Guided and supported by a small team, he started on 29th April at Rowley Park in Staffordshire. His full running schedule is as follows:

7th May – The Stray, Harrogate

He would welcome any support during his runs which start between 9am-10am each day, and you would like to sponsor his efforts, you can do so here: https://www.justgiving.com/fundraising/alongrunhome

Brigadier (Ret’d) Robin Bacon, Chief of Staff ABF The Soldiers’ Charity, comments: “Having cheered on all the runners at the London Marathon recently, I saw how running just one is a really tough task, let alone one a day for nine days. We would like to thank Sean for his support and wish him the very best with this incredible feat!”