If you would like to make a donation to our work supporting the Army family, head over to our JustGiving page.

Unable to meet in person due to the COVID-19 pandemic, the East Anglia team decided to hold the concert on YouTube and Facebook for the very first time. They were delighted to have the chance to spread some festive cheer and bring the concert to people in the comfort of their own homes, wherever they might be in the world. 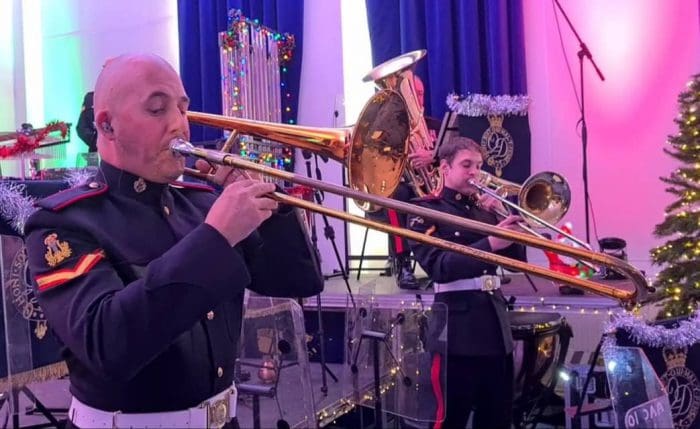 Supporters were able to enjoy six festive musical pieces, compered by the Director for the British Army Band Colchester, Major Lauren Petritz-Watts. From full band arrangements to Big Band ensembles, there was something for everyone. A stand out performance was ‘O Holy Night’ sung beautifully by one of the female musicians accompanied by a lone guitarist. The Big Band drew the concert towards a close on a high note with ‘Keep Calm and Carol On’, while the final, poignant rendition of Auld Lang Syne left not a dry eye in the house.

Speaking afterwards, Alys Potter from our East Anglia team said: “This was a new way of producing an event and a slight break from our traditional Christmas Concert, which is normally held each year at St Botolph’s Church, Colchester. We had to think quickly find a way of bringing the concert to our supporters so that they could enjoy the band as they would at a physical concert. The question was how? The answer: ‘improvise, adapt and overcome’! By working together, the charity and the British Army Band Colchester were able to produce a wonderful alternative.”

We would like to say a huge thank you everyone who watched the concert and made a donation. With your help, we are able to go on providing grants to soldiers, veterans and their families at this very challenging time. Since the beginning of the financial year, we have awarded £1.8m to over 2,000 individuals and families, and £2.2m to 30 leading charities and organisations that support the Army family. Thank you for helping us be here for soldiers, for life.

For those who would still like to watch the concert, it is available to view on YouTube:

If you’d like to donate you can do so via our JustGiving page.