Our History: 23rd August and A Tale of Two Cities

Our History: 23rd August and A Tale of Two Cities

In our 75th anniversary year, we are looking back at the penultimate year of the Second World War and the circumstances which led to our founding. This time, we resume our story in Paris, where civilians and Resistance leaders are launching an insurrection against the occupying Germans. Meanwhile, the Control Board of the newly formed Army Benevolent Fund meets for the very first time.

15th August 1944 dawned hot and dry. In London, a lunchtime broadcast brought news that Allied forces had invaded the Mediterranean coast. BBC journalist Godfrey Talbot reported live from the beaches of Provence: “Our air armada was a tremendous sight. […] This is a great day, a new assault on the enemy in great strength.” By nightfall, the Allies had seized control of the beachhead and brought 100,000 men ashore. Later, Hitler would confide to his closest advisors: “15th August was the worst day of my life.”

In Paris, news of the Allied landings spread like wildfire, igniting hopes of an insurgency. At the time, the leader of the French Resistance was a man named Henri Rol-Tanguy – known as Colonel Rol – a metal-worker and committed Communist from Morlaix in Brittany. For Rol as for ordinary Parisians, the liberation of Paris by its citizens would be an opportunity to expunge the ritual humiliation of June 1940, when German troops had entered Paris unopposed. In an act of extraordinary symbolic revenge, Hitler had demanded the French surrender in a railway carriage in the forests of Compiegne – scene of the German capitulation in 1918. Now, four years on, the long occupation would end with an equally symbolic act. 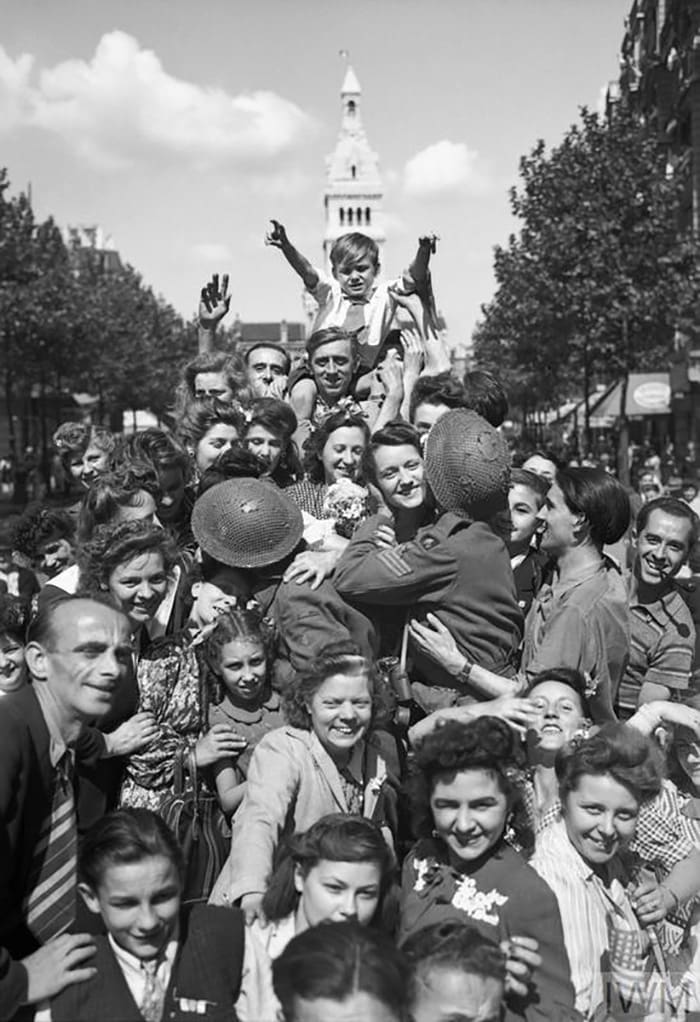 News of Allied victory in Provence came amidst an already febrile atmosphere. The previous evening, the German authorities had disarmed parts of the Paris police force, prompting a strike. Every police service was affected, including the emergency services and those guarding the prisons. That same day, in the north-eastern suburb of Pantin, over 1,500 men and 500 women – all political prisoners – were sent to the concentration camps at Buchenwald and Ravensbruck. Despite calls for caution from some quarters, Resistance leaders seized vehicles across the capital and issued posters, declarations and instructions on walls and buildings across Paris, calling for ‘l’insurrection libératrice.’ A general strike followed on 18th August.

The following day, columns of German vehicles began moving down the Champs Élysées in Paris, continuing their eastward retreat in front of the advancing Allied army. The Resistance called upon men, women and children to transform their city into a ‘fortified camp,’ lodging a defence of every street and building. As Colonel Rol explained in a poster: “The whole Parisian population: men, women and children – must build barricades against enemy attack, organise yourselves by street and by building.” As Rol knew, barricades had played a powerful military and symbolic role in the revolutionary history of Paris. Barricades were raised on the historic ‘First Day of the Barricades’ on 12th May 1588, during the French Revolution in 1789 and increasingly throughout the nineteenth century. In August 1944, barricades were once again present in much of Paris – notably in working class areas. As historian Matthew Cobb notes: “The distribution of the barricades corresponded to the class lines that underpinned the conflict between Vichy and the Resistance, while the very presence of the barricades indicated to everyone that these were momentous historic days.”

Meanwhile, in London, a parallel history was being enacted. As news of Operation Dragoon reached the capital on 15th August, the Army Benevolent Fund (ABF) was being established by Trust Deed. On 23rd August, as Allied forces drew closer to the embattled French capital, the Control Board of the newly formed ABF was gathering in the offices of Hobart House in London’s Belgravia. At the helm was Field Marshal Lord Cavan, a veteran of the Boer War and the First World War, who announced the new Patron as HM King George VI. This board meeting was the culmination of a long enterprise that had begun in February 1944, with a memorandum sent from the Secretary of State for War to Churchill’s War Cabinet calling for an Army Benevolent Fund to support the millions of British servicemen at home and overseas.

On 24th August, Allied troops arrived to liberate Paris. The following afternoon, German General Dietrich von Choltitz, military governor of Paris, surrendered the city, notably disobeying Hitler’s orders to raise Paris to the ground. General Charles de Gaulle, leader of the Free French Forces, arrived later that afternoon to assume control of the government. On 26th August, cheered by countless people, de Gaulle led the triumphal parade on the Champs-Élysées. For the Allies, the Liberation of Paris represented a symbolic victory, rather than a military one. In fact, Eisenhower had planned to bypass the city entirely, before being persuaded otherwise by de Gaulle. But as Martin Blumenson later reflected, “For sheer romance, joy, delight, tears of happiness and emotional dizziness, the liberation of Paris surpassed all other momentous events of the war.”

The Liberation of Paris concluded the initial phase of the vast odyssey that had begun on the Normandy beaches on 6th June 1944 – a “titanic enterprise,” says Olivier Wieviorka: “without precedent in the history of warfare.” The success of the campaign in France vindicated Allied hopes that the end of the war was now in sight, and intensified the atmosphere of resolution and expectation. It was against this backdrop that the Army Benevolent Fund was formed – created by an Army Board determined to honour the debt owed to its service-personnel, who had given so much in the pursuit of peace. It is this spirit which prevails in our charity to this day, 75 years after its founding, as it works to ensure that all soldiers, veterans and their immediate families can live lives of independence and dignity.

While there is a British Army, there will be The Soldiers’ Charity.