General Sir Michael Rose shares his recollections of commanding the SAS during the 1980 Iranian Embassy siege and his thoughts on the Army’s twenty years in Afghanistan in a new episode of our General Talk podcast series. 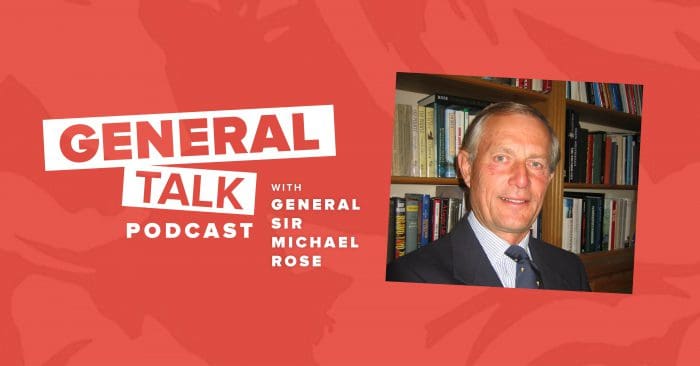 General Mike’s take on the siege fully reflects his attitude that, in life, “the way things work is never the way they’re meant to work.”

He reveals that he found out about the siege via a contact who’d left the Army to join the Met Police and was a dog handler in the cordon around the Iranian Embassy. The policeman had called Rose and said “You’d better get down here, boss, the Police aren’t going to be able to deal with this – get yourself down here.” Rose then immediately rang the MOD and said he’d head down the motorway at speed, only to be ordered not to do so. “Of course, I completely ignored that,” Rose says.

What followed was the immediate deployment of his squadron, a scrambled helicopter ride, and the fastest journey across London he’s ever experienced, “jumping every red light there was.”

Listen to the podcast to hear Rose’s fascinating first-hand account of the siege, which lent huge publicity to the SAS and an avalanche of applications.

“We lost the war in 2003,” Rose says. “When we went into Afghanistan in 2001 we were working for and alongside the Afghanistan people to get the Taliban out of their country. We weren’t the occupiers, we were the facilitators of the Afghan people. We broke our promises and betrayed them by legging it off to Iraq [following Blair’s orders, to search for weapons of mass destruction]. This caused the beginning of the end.”

On Tony Blair, Rose says: “To go on television saying we shouldn’t withdraw – well, it was his withdrawal of the troops out of Afghanistan in 2003 that caused the collapse of that mission. It’s like the chief arsonist going around today telling everyone how to put out the fire that he himself had started all those years ago.”

To those who served in Afghanistan, and noting this podcast was recorded before the final withdrawal at the end of August, he says: “They can look back with enormous pride. They did what was asked of them at a tactical level. In the long run what we have put into Afghanistan will pay rewards at some point in the future.”

Search episodes of our General Talk podcast, which explores the changing role of the military in the modern world.