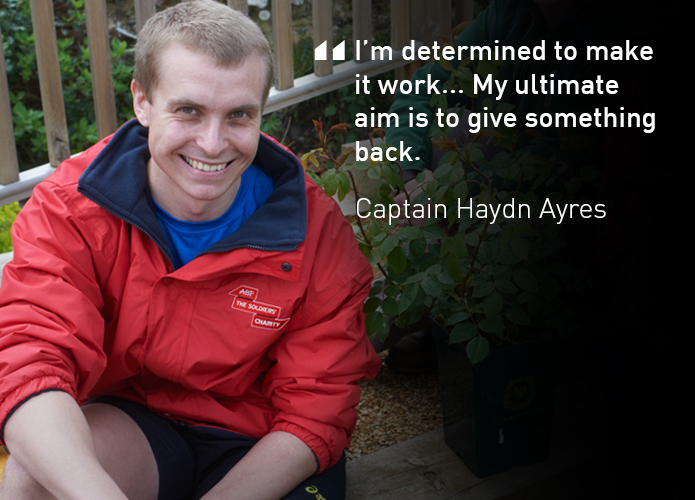 Captain Haydn Ayres of the Royal Corps of Signals was fortunate to escape with his life when he was involved in a serious ‘on duty’ road accident near Coventry, whilst travelling to a military exercise in South Wales. The incident happened on 9th March 2014, when Haydn’s driver swerved to avoid an obstruction in the road and lost control of the Land Rover. The accident killed his driver and seriously injured Haydn. His life was changed forever.

The Land Rover mounted the grass verge and flipped sideways several times. Haydn sustained a number of severe injuries, including a left knee fracture with snapped ligaments, a fractured pelvis and a dislocated left shoulder.

He also received lacerations to his ear, hand and legs. The impact of having broken all of his ribs on one side also resulted in Haydn sustaining a collapsed lung; injuries that brought the end of Captain Ayres’ career as a young Officer.

Whilst he was transitioning from the Army into civilian life, ABF The Soldiers’ Charity helped Haydn with a grant towards an exercise bike to aid his physical rehabilitation. He says: “I cannot run and I live in a remote area of Wales, so an exercise bike is the perfect solution to help keep my fitness up and keep pain levels manageable.”

As part of The Soldiers’ Charity’s wider work in supporting specialist charities, we were also able to support Haydn through our funding with a course, and a horticultural therapist at Headley Court (Defence Medical Rehabilitation Centre). This scheme is run by HighGround; a military charity that supports and improves the well-being of ex-servicemen and women through using safe, rural environments where they can access new opportunities in the land-based sector.

Working alongside a horticultural therapist has enabled Haydn to continue his physical rehabilitation, as well as learn the new skills which have helped him successfully transition out of the Army. Through a combination of an individual grant from The Soldiers’ Charity, horticultural therapy and completing a course at an agricultural college, Haydn has been able to set up his own business. He is currently developing a small-holding with livestock and on site ‘glamping’: “I’m determined to make it work. I just want the business to be sustainable. I don’t need to be rich. My ultimate aim is to give something back.”

Speaking of the support that has enabled his post-Army transition, Haydn had the following to say: “If it wasn’t for The Soldiers’ Charity and the Royal Signals Benevolent Fund I would not have been able to afford this. Thank you again for all your work, it really has made a difference.”

Find out more about HighGround on their website at www.highground-uk.org