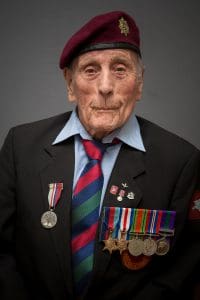 Corporal Sid Sallis, 96, is the last surviving Royal Army Service Corps (RASC) Air Despatcher to serve during the Battle of Arnhem in 1944. The battle was part of Operation Market Garden – the allied push into the German-occupied Netherlands – and would later be immortalised in Richard Attenborough’s 1977 film A Bridge Too F

The fighting around Arnhem was ferocious. Only the 2nd Parachute Battalion, under Lt Col John Frost, succeeded in their objective. For four days, those few hundred men held the bridge, reliant on parachute drops from Air Despatchers for food, water and ammunition.

With them was 21-year-old Sid, who was attached to 1st Airborne Division 63 Squadron. Sid had joined the Army in 1942 as a driver. When an injury sustained in the boxing rink put him out of action for D-Day, Sid joined the 1st Airborne Division and on 20th September found himself flying over Arnhem dropping supplies to British troops on the ground. It was incredibly dangerous work. Sid remembers: “The Germans were all around us during the drop, and although we couldn’t see them, they could see us. We lost 19 men on the very first day.”

Sid served a total of five years in the British Army, including a spell in a peace-keeping force in Palestine after the war, but it is his time in Arnhem that has stayed with him. He has since returned to Arnhem with his regiment, and penned a poem, Arnhem, about his experiences.

When he needed to move into a care home in England following a period of ill health in 2015, Sid’s family sought help. ABF The Soldiers’ Charity were approached and agreed to assist with his care home fees. Sid’s health and lucidity have improved markedly. Sid’s daughter-in-law said: “We are really very grateful of the funding support that has been given; it has made a huge difference.” 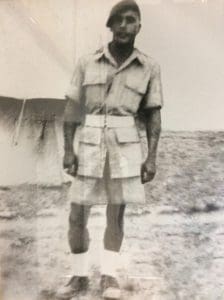