Former Welsh Guardsman Dale struggled to find work after losing his leg in Afghanistan in 2009. Now, with a little help from ABF The Soldiers’ Charity and our partner, The Poppy Factory, he is back on the road as an HGV driver in South Wales. 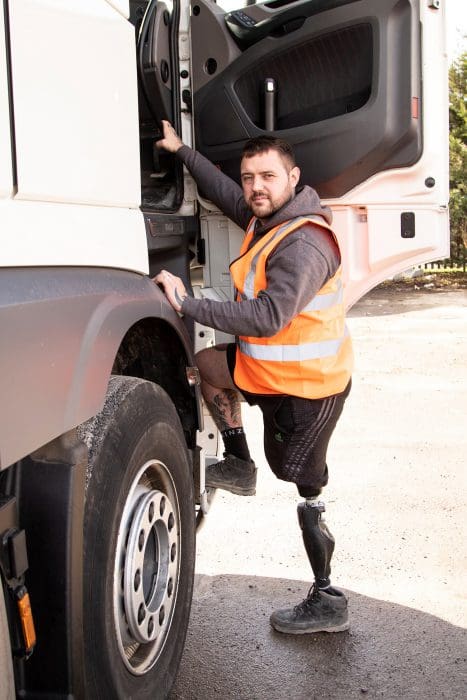 Dale served for nine years as a Guardsman in the Welsh Guards. He says: “Growing up, I always loved cars so after school I went to college to study mechanics. I joined in 2003 at the age of 16 and was deployed to Iraq, Belize and Bosnia.”

Then, in 2009, Dale was seriously injured in Afghanistan when the vehicle he was travelling in went over an improvised explosive device. He says: “I was up top as a Gunner and was blown out of the vehicle. My only memory is from the day before, playing volleyball in the base. However, one of the boys captured the whole thing on a camera mounted to his helmet. It’s very strange to watch the video because the first five minutes of the footage is just the dust clearing.” Dale suffered severe head injuries, broke his spine in three places and had his left leg amputated.

He says: “I had rehabilitation for two and a half years at Headley Court and was finally discharged in 2013. It was a very difficult time but the thought of my partner, who is now my wife, and children kept me going. I have a strong mind and eventually decided that I had to get on with things. I came to realise that I was lucky to be alive – but I had absolutely no idea what to do with my life after I had been discharged.”

In the years after his discharge, Dale struggled to find work. He reflects: “I was a mess, some days I wouldn’t even leave my room. My mum was in my ear telling me to look for a job, but I didn’t know where to go. I just stayed inside.” 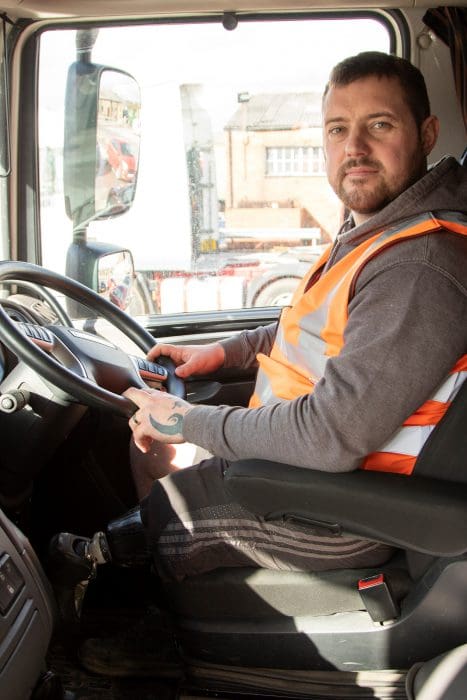 It was around this time that Dale received support from The Poppy Factory, one of 89 charities funded by ABF The Soldiers’ Charity. Dale explains: “I started talking to Natalie, the Employment Consultant for South West Wales. I had been a mechanic before joining the Army and had thought about doing that again, but being under a vehicle all day wouldn’t have been good for my back. So I thought about driving. I’m obsessed with cars anyway, so getting a job driving a Heavy Goods Vehicle (HGV) seemed to make sense. They’re all automatic these days, so my injury wouldn’t affect being able to drive.”

At this stage, ABF The Soldiers’ Charity stepped in with a grant to ensure Dale was able to get the training and qualifications he needed to start his new life as an HGV driver. Dale says: “I got my Category C licence through the Army, but lost it after sustaining my head injury so I had to pass that again. The training was great; I did four days of driving and on the fifth day I took my test. I passed with flying colours – it was a really great feeling!”

Natalie says: “When Dale was referred to me, I worked with ABF The Soldiers’ Charity to make sure he got the qualifications he needed to drive an HGV. He was buzzing and motivated to get back to work, so I started talking to local employers.”

Natalie introduced Dale to Jeff, a Transport Manager at John Raymond Transport Ltd (part of the Nolan Group), who she had met at a local jobs fair. Dale says: “We went to visit the company site for a tour and to find out more about employment opportunities.” Dale was delighted to be offered a job.

Jeff, Dale’s Manager, said: “Dale has that disciplined military mindset and he’s very adaptable. He comes here in the morning, picks up a set of keys, and he’s out of the door getting on with it. If I had another Dale apply for a job tomorrow, I wouldn’t hesitate.”

Dale mainly transporting goods across the Midlands for supermarkets. “It’s been good for me mentally; it’s given me something to do and got me out of the house. It’s also cleared my head and meant that I’ve not been worrying about silly things.”