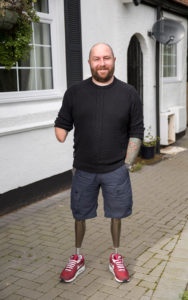 Former Guardsman Dave Watson joined the Army in 2008, aged 20, following a life-long ambition to serve in the Scots Guards.

During his first tour of Afghanistan in 2010, Dave stood on an Improvised Explosive Device while out on patrol. As a result of the explosion he lost both legs as well as his right arm, and had to be brought back to life whilst being air-lifted to safety.

Within just seven weeks of sustaining his injuries, he was able to walk on short prosthetic legs. Dave is now married, is a father, and in 2016, underwent pioneering osseointegration surgery in Australia; a huge step towards improving the quality of life he can now enjoy with his family.

The Soldiers’ Charity have supported him along the way with grants for a specialist bed, and vital home adaptations to make his home safe and accessible.

The impact of these adaptations has been huge, Dave is now able to get around his property freely, lifting his daughter to and from the car, and accessing his garden without needing assistance.