When Argentina invaded the Falkland Islands, Denzil, then aged 25, was a Lance Corporal in the Anti-Tank platoon, 3rd Battalion, The Parachute Regiment (3 PARA). In April 1982, he set sail for the islands on SS Canberra with his battalion, who were among the first troops to arrive at Port San Carlos. After an advance tactical battle march of 70 miles, they reached the edge of Port Stanley and eventually engaged the Argentines in the Battle of Mount Longdon.

During this ferocious battle, Denzil was hit by a mortar bomb and suffered serious injuries, losing his left leg. These injuries later affected Denzil’s personal mobility because of difficulties in accessing his home due to a steep and uneven driveway. In 2021, our charity helped to fund the resurfacing of Denzil’s driveway, which gave him more independence in his daily life.

After leaving school, Denzil joined the Junior Parachute Company in 1972 at the age of 15. Ten years later, he was still with the Army, now ranked Lance Corporal in 3 PARA and stationed in Tidworth, Wiltshire. When the Falklands conflict started, and a decision made to deploy the Task Force and British troops, Denzil found himself boarding the famous ocean liner SS Canberra with his battalion on 9 April in Southampton, where the ship had been re-fitted to serve as a troopship.

Denzil travelled to the South Atlantic with his battalion who were among the first troops to arrive at Port San Carlos on 21 May. They undertook a long tactical battle march of 70 miles across the north of the East Falkland, each carrying approximately a 100 pounds of weapons and ammunition. Following a very gruelling journey on boggy ground in cold, wet conditions, they arrived near Port Stanley, the Falklands capital on 11 June.

Recalling this difficult march across the island on the 40th Anniversary of the Falklands Conflict, Denzil says; “Obviously anniversaries do bring up strong memories but, for me, my memories are as fresh today as they always have been.

The March was the hardest physical and mental event of my life up to that point. The terrain was unforgiving as much as the weather as the islands entered the harsh South Atlantic winter. The exhausting March took its toll on young soldiers who would soon all face the most testing time any of us had faced in our young lives.”

3 PARA was ordered to take Mount Longdon, situated to the northwest of Port Stanley. Hundreds of Argentine soldiers were defending Mount Longdon, which is a long narrow feature of rocky terrain, running from east to west with two summits. The area around was also heavily mined, making it a very dangerous mission.

Denzil’s unit provided close support to the battalion’s lead company during the attack, deploying close behind them to avoid the risk of friendly fire during the confusion of hand-to-hand fighting in the darkness. The fierce fighting saw heavy losses, with 23 of Denzil’s comrades killed and 43 wounded, including himself. It was during this continuous shelling, just one day before the ceasefire, that Denzil was hit by a mortar bomb at dusk on 13th June. This serious injury resulted in the loss of his left leg below the hip and badly damaged his right leg. He lost a lot of blood which could have cost him his life. Thankfully, doctors on board the ship SS Uganda provided emergency medical assistance before he was transported to hospital.

Despite his injuries as an amputee, Denzil says it was a cause worth fighting for and he is proud of what he did. He says: “My feelings during the 74 days of the war were very mixed. Right from the landings on the 21st May, it was with immense relief that our expectations of an opposed landing were wrong. That relief turned to anger as we had a grandstand view from our positions overlooking our ships vulnerable at anchor being bombed. We were keen to break out from the beach head and began our epic tab across the east island towards Stanley and our battle on Mount Longdon.’

The bloody battle of Mount Longdon deeply affected everyone involved, including Denzil. “Scenes of corpses of my friends and those of the enemy will haunt me forever. It was without doubt life changing… I would never have survived without such well-trained mates who battled to save my life and the excellent military care in the hospital.” 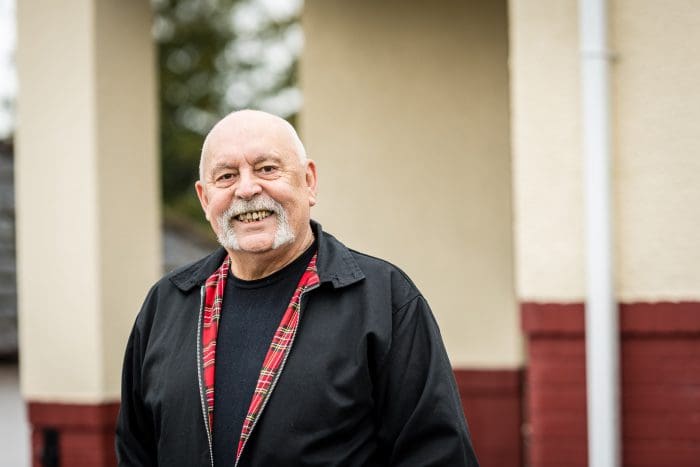 It took Denzil years to recover from his serious injury and learn to walk again, and also adjust to civilian life after witnessing events that would stay with him forever. Being part of the South Atlantic Medal Association (1982), our partner organisation which he co-founded, has been a way for him to cherish the memories of all the servicemen who lost their lives in the Falklands Conflict.

One issue that prevented Denzil from being more independently mobile in everyday life was his driveway and path to his house, which became run down and ridden with potholes. In 2021, ABF The Soldiers’ Charity and BLESMA helped to fund the resurfacing of his driveway and making his front steps wheelchair friendly. As a result, Denzil has much better independent mobility and can more easily access his car.

Denzil says “I was desperate for a new driveway, stopping me getting out. It was that bad, that I couldn’t go out in the wheelchair. My wife and I are both very thankful to ABF The Soldiers’ Charity for their funding support and I am very grateful for this assistance to give me independence and well-being.”