Sergeant James Nugent’s daughter, Elsie, was diagnosed with spinal muscular atrophy in the early months of her life, which requires her to use a wheelchair all the time. As she grew, James and his wife struggled to lift Elsie and suffered back injuries. We provided £12,000 to fund an extension to their house, mobility equipment and a ramp, so that Elsie has a safe and comfortable living space and the family can live together happily. 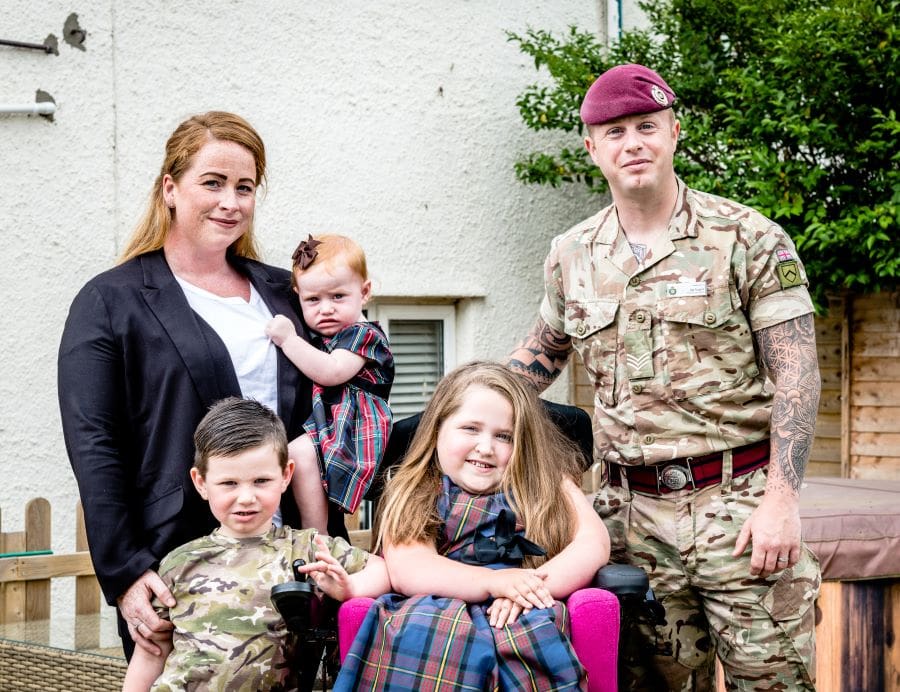 Sgt James Nugent is currently stationed at 1 Royal School of Military Engineering Regiment, Chatham and has served with the Royal Engineers for 14 years. He joined in 2007 at the age of 16 and completed his basic training at the Army Foundation College Harrogate. James has become a specialist in close support and armoured engineering and did several tours in Afghanistan. He lives with his wife, Anouska, and three children, Elsie (aged eight), Arlo (aged five) and one-year old Adelaide.

Elsie’s spinal muscular atrophy was detected when she was a baby, and she was not initially expected to survive beyond 18 months. However, she continues to make her family proud through sheer resilience, despite spending most of her young life in and out of hospital. She receives regular medication and gene therapy treatment every six months via lumber puncture, which has helped to stabilise her condition.

James and Anouska were able to look after Elsie when she was very young but, as she grew up, lifting her to carry out basic child-care became much more difficult and led to back injuries.

The family were able to finance some modifications to their home but decided to seek charity help to ensure safer personal care and greater dignity for Elsie. James requested funding support from SSAFA, our partner charity, to build an extension so that she could have a bedroom, wet room and mobility equipment. Our charity collaborated with the Royal Engineers Association and the Royal British Legion, each donating £12,000 to cover the costs. Elsie now has a place of her own, to access on her own, sleep and conduct personal care.

James says: “Words cannot put into context what this means to our family. Elsie now has her own space and independence, and we cannot thank you enough. This truly is life changing.”