Having served in the Royal Engineers, WO2 John Phillips commanded a bomb disposal team in the Falklands Conflict in 1982. He saw the brutal aftermath of The Battle of San Carlos, a key battle between Argentine aircraft and ships of the British Task Force. John’s team had been tasked with the dangerous duty of deactivating Argentine bombs landing on Royal Navy ships, including HMS Argonaut and HMS Antelope; which resulted in serious injuries to John and a member of his team killed in action. Today, John is an Honorary Vice President of The South Atlantic Medal Association 82 (SAMA 82), a charity promoting comradeship among all veterans of the South Atlantic campaign, and whom we proudly support with annual funding. 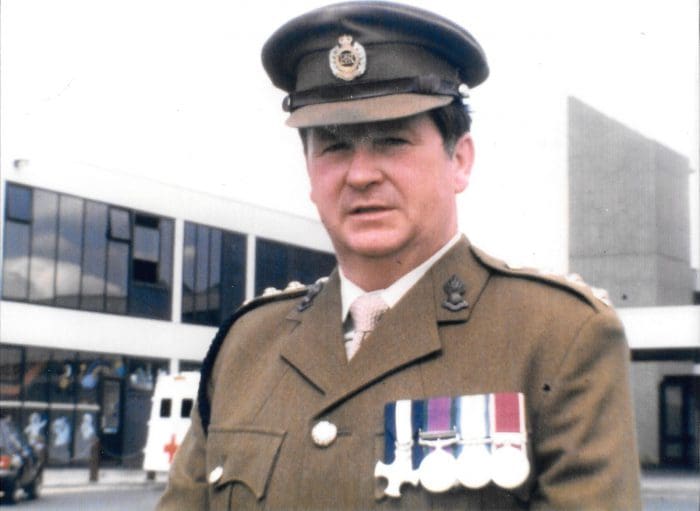 In 1982, John travelled to the Falklands on SS Canberra and RFA Sir Lancelot with his Royal Engineers colleague, Staff Sergeant Jim Prescott. They were tasked with deactivating two 1000lb bombs on board HMS Argonaut, which had been attacked by Argentine aircraft during the early part of The Battle of San Carlos. After successfully deactivating both bombs, they returned to their base in San Carlos Bay.

On 23 May, the bomb disposal experts were tasked to return to HMS Argonaut. However, on arrival, they were then ordered to deploy to another ship struck by bombs in the San Carlos Bay battle, HMS Antelope. John spotted that the damage to the ship had been caused by the same type of bomb they had dealt with the day before. However, the location of the bombs meant that the task of defusing them was much more difficult. One bomb was completely inaccessible because of wreckage in the Petty Officers’ Mess bunk and the other was even more dangerous since it was located in the engine room’s refrigeration unit.

After three attempts made by John to withdraw the fuse by remote control failed, he tried another method using a small explosive charge. Unfortunately, this detonated the bomb, fatally injuring Staff Sergeant Jim Prescott instantly and leaving John severely wounded.

John can still clearly remember how the disaster unfolded: “After each attempt nothing happened but after the fourth one there was this almighty explosion, and everything seemed to happen in slow motion.

I was next to Jim, and I remember we stared into each other’s eyes for a split second before the blast followed and I was thrown through the air.”

The explosion set HMS Antelope ablaze and a naval crew member quickly informed John of Jim’s death. Urged to escape the burning ship, John was led through smoke onto a landing craft along with other crew members who had been ordered by the ship’s captain to abandon ship. Twenty minutes after they had departed for Ajax Bay, HMS Antelope exploded and broke in half.

After receiving urgent medical care for his injuries, John had his left arm amputated at the shoulder. He was awarded the Distinguished Service Cross for his actions in the Falklands. On his return to UK, he continued his Army service after his recovery, going on to serve for 31 years. He was commissioned and completed his service at the rank of Captain (QM).

John has been a member of SAMA 82 since it formed in 1997. He proposed the idea of starting a twice-yearly newsletter which was printed for distribution with the help of our funding.

John said: “Without The Soldiers’ Charity’s funding, we would not have been able to keep the newsletter going to the degree we have. Funding has enabled SAMA 82 to provide a better, more professional, printed, glossy and informative magazine that is distributed around the world”.