Over 70 years ago, Les was serving as a Gunner in the Royal Artillery. As part of a five-man team he played a critical part in demolishing German positions inland at Normandy during the Second World War. Les fought his way across Europe and was demobbed in 1947. He then went on to join the Reserves in which he served for 13 more years. In February 2016, Les was presented with the Chevalier de la Legion d’Honneur at the French Embassy in London. 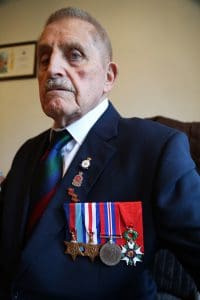 Decades later, Les needed the support of The Soldiers’ Charity. Following surgery for knee and hip replacements, he struggled to get in and out of the bath safely. Without the installation of a walk-in shower, Les feared that he and his late wife Jeanette would have to leave their home of 30 years. After an initial contribution by local authorities, The Soldiers’ Charity stepped in with a grant that allowed for the completion of the work and the provision of a safer living environment.

‘I think it’s wonderful how the British people will so easily open up their purse and put a pound in, we appreciate it so much’.

Our funding paid towards the installation of a walk in shower at the home of WWII veteran Les and his late wife Jeanette.