Rick served in the Duke of Lancaster’s’ Regiment for 16 years, until an operational injury ended his Army career. He has worked hard to overcome his injuries and lives independently with his dog, Max, close to family and friends.

Rick joined the Army just before his 17th birthday. He served for 16 years, rising to the rank of Sergeant and travelling all over the world, including operational tours of Iraq and Afghanistan. Rick says it was a great, great honour to be a Sergeant: “You’re almost dad to 30 blokes; something I was very proud to achieve.”

On 27th May 2010, Rick was a month into his first tour of Afghanistan as a newly promoted Infantry Platoon Sergeant when he stepped on a Taliban IED. He lost his legs and much of his right arm in the blast.

Rick praised the rescue team who took just nine minutes to reach him in a helicopter from Camp Bastion, saying: “I owe them my life”. Three weeks later, he woke up in hospital in Birmingham to discover the damage the blast had caused. “It wasn’t until I woke up that I  realised the extent of my injuries. It wasn’t just the physical injuries. I was stuck in a hospital bed for four months which is just boredom and you start thinking things.”

Following physiotherapy and rehabilitation at Headley Court, Rick is able to drive and gets around on a mountain trike wheelchair. He says he does not suffer from PTSD: “Thankfully, I’ve been able to crack on with my physical injuries.” Rick is now fully independent and lives with his dog, Max, in an adapted home close to family and friends. He enjoys going out with Max, maintains a good social life and keeps in touch with military friends.

We were able to support Rick with a grant towards a specialist wheelchair and a corner bath, and he is now an ambassador for our charity. He says: “The mountain trike wheelchair has changed my life. For the first time in eight years I was able to go on the beach. Prior to having the bath seat I was unable to have a bath. If someone told you, ‘You’re not gonna have a bath for the rest of your life’ then it’s not a little thing. All of a sudden, it’s a big thing. So it’s life changing stuff, it really is. The bath seat has enabled me to have a bath whenever I want to.” 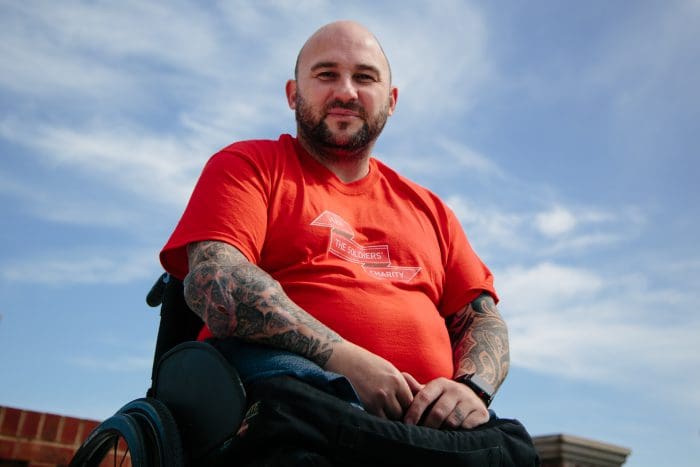