We are delighted to announce a £2,650 grant to Stand Easy Productions to help former soldiers perform at the Edinburgh Festival Fringe.

The Edinburgh Festival Fringe is the single biggest celebration of arts and culture on the planet, welcoming creativity from around the world. It works with over 30 charities and communities across Edinburgh to create opportunities for people to express themselves creatively and experi-ence the thrill of a live performance.
Stand Easy Productions uses theatre and performance to aid the recovery of serving and former Armed Forces personnel who are wounded, injured or sick. Each project takes the skills honed during Army service – teamwork, discipline, communication, courage and respect – and builds on them to improve motivation and self-esteem. The theatre provides a unique space for soldiers and veterans to build confidence and resilience, whilst educating audiences about their experiences. 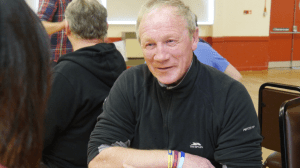 Our grant will go towards supporting Stand Easy’s theatre production at the Edinburgh Festival Fringe. Last year, Stand Easy developed their own play and produced a script through workshops. The play, which is called ‘The Dandelion Patch’, is based around the stress put on families before and after service and will be performed again this year. The play draws on the experiences of the cast which makes the production highly emotive and moving, whilst weaving in humour to captivate the audience.

Alan Cameron, Founder of Stand Easy added: “This 55 minute play was devised in under 3 weeks. This is a remarkable achievement for a company of any kind. What is so important is that these are the voices of our ex-Forces participants themselves, nobody is speaking for them.”

Brigadier (Ret’d) Robin Bacon, Chief of Staff at ABF The Soldiers’ Charity, added: “Theatre and performance is a great way to keep the bond that many soldiers feel during their service, especially after they have left. We are delighted to be supporting the unique cast at Stand Easy Productions and wish them the best of luck at the Edinburgh Festival Fringe.”