This month saw the return of The Frontline Walk, our 100km commemorative trek in France and Belgium.

For the first time, walkers were able to choose between two routes – the WW1 Western Front route, or a new route across the landing beaches and battlefields stormed on D-Day. All in all, 141 walkers trekked 100km to raise vital funds for our charity and remember the fallen of the two world wars.

Week One: The Normandy Beaches

In the first week, our ambassador Andy Reid MBE led 100 walkers across the beaches of Normandy, to mark the 75thanniversary of D-Day and Operation Overlord. It was an incredibly moving experience, encompassing the now peaceful beaches of Utah, Omaha, Gold, Juno and Sword and finishing at Pegasus Bridge. Pegasus Bridge was captured successfully early in the morning of the 6th June, severely reducing the effectiveness of a German counterattack.

One team from the Normandy Beaches route has set some pretty impressive goals. The Rugby Relics have been taking part since 2017 and raised an incredible £53,000 for our charity. The team has 20 cumulative members so far, and plans to bring their total to £100,000 over the next two walks.

Team members Chris Price and Jason Sherer say: “As a team of veterans, the Rugby Relics ethos has always been to help those members of the military family who struggle through hardship or injury, to remember former colleagues and friends who died serving their country and to provide financial help where it is needed.

“We were fortunate to complete our military service in good health, but many others were not. The Frontline Walk presents us with a platform to help others by fundraising for a very worthy charity.  We walk, we sing, we raise money and hopefully a smile along the way, and we are on course to achieve our goal of £100,000 over five years.” 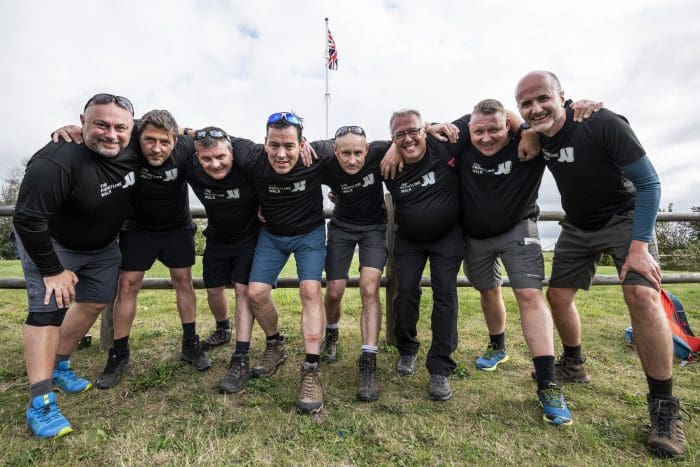 In the second week, 41 walkers trekked across the battlefields of the Somme and Passchendaele, led by charity ambassador Brenda Hale OBE. They started at Lochnagar Crater and finished at the Menin Gate with the Ceremony of the Last Post.

The group included Steve Head, whose passion for history is fuelled by his great uncle, Rifleman Frederick George Jones of 12th Service Battalion Rifle Brigade. Frederick was killed in action on the Somme on the 17th September 1916. Despite never meeting Fred, Steve has continued to keep his memory alive, researching WWI and telling his story at every chance he gets. Steve carried a photo of Fred throughout the walk, including to his final resting place at Hebuterne. Steve is still fundraising for our charity. You can visit his profile here.

Begin your remembrance journey in a few short steps