From helping each other through the Afghanistan conflict to coping with Covid, the Military Wives Choirs reflect on the healing power of singing 10 years on

Founding members of the Military Wives Choirs, including Caroline Jopp and Nicky Clarke, who speculatively wrote to Gareth Malone about their Catterick choir with no idea of the fame that would follow, have underlined the mental health benefits of singing in a podcast to mark the 10th anniversary of “Wherever You Are”, which shot to Number 1 in the UK charts in 2011.

Nicky Clarke speaks to our podcast host Harry Bucknall about setting up the movement 10 years ago: “it wasn’t about the glitz and the glamour, it was about the joy of bringing women together, to sing together and support one another.”

Members of The Military WAGS Choir, Catterick Garrison and Chivenor Military Ladies Choir feature on the podcast alongside Nicky and members of the Military Wives Choirs. 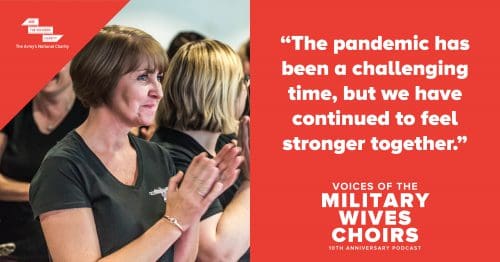 The Military Wives Choirs has grown from the first choirs to a network of 72 choirs, who have been helping each other through the Covid pandemic. Almost all the choirs have been coming together over Zoom during lockdown to share their passion for unity through singing. Hilary Davan Wetton, Artistic Director of the Military Wives Choirs, underlines how singing can be a form of therapy during difficult times: “While they’re in my rehearsals, they can’t think about problems they’re facing because if you start thinking about that, you sing the wrong note. You have to blank out completely all the pressures in your life.”

Choir members from across the UK and British military bases abroad join forces on the 10th anniversary podcast to discuss how singing together has been a lifeline – from helping them cope with the strain of their loved ones being deployed to finding moments of togetherness and positivity during lockdown.

Maggie Pedder, Chair of Trustees of the Military Wives Choirs and a choir member, says: “Choir is a really important evening in my busy week, where I can set aside some time just for me and really feel part of a community. The pandemic has been a challenging time, but we have continued to feel stronger together. When singing together in person has not been possible, we meet virtually for music-making, quizzes and a huge amount of fun and laughter!

The Military Wives Choirs always welcomes new members; we bring women from across the military community together to sing, share, and support one another.” 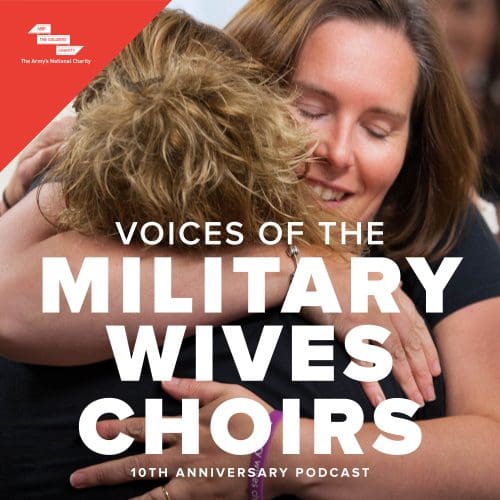 Sir Andrew Gregory, Chief Executive at SSAFA the Armed Forces charity said: “SSAFA provides welfare support to serving and retired members of the Armed Forces, and their families, in many different ways.  The network of Military Wives Choirs, a critical part of the SSAFA community, reduces isolation and improves mental wellbeing for over 2,000 women, something that has proved its worth both during the height of the deployment to Afghanistan and equally during the Covid pandemic.  As the Choirs celebrate their 10th anniversary, the benefits they have brought to their members day in, day out and especially during difficult times, has been life changing.”

Listen to the podcast here.