We are delighted to announce that Hexham Detachment, Northumbria ACF are the winners of the Revision Cadet Challenge 2019.

The Detachment raised a sum of nearly £4,000 for ABF The Soldiers’ Charity by taking on several challenges, many of which were inspired by the cadets themselves. Each challenge had a ‘method of transport’ theme, such as walking and cycling, rowing and climbing. In these activities, the Detachment climbed the equivalent of Northumberland’s highest peak on a rolling climbing wall, rowed across Northumberland on machines, completed a 10-mile walk of Hadrian’s Wall, fundraised at the Northumberland County Show and more! 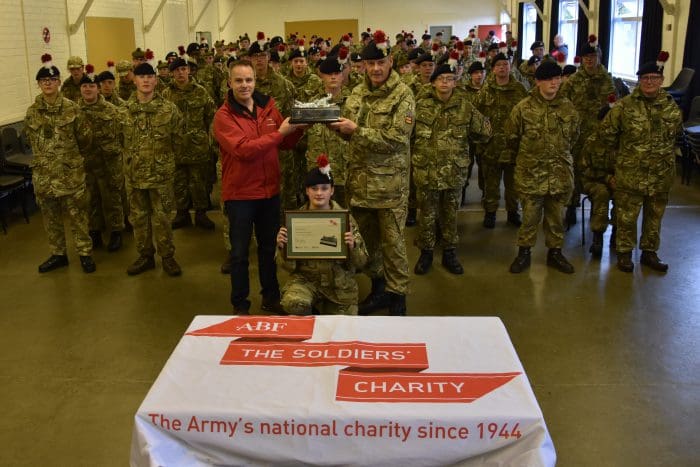 The Revision Cadet Challenge is exclusive for the Army Cadet Force and is judged by four senior staff members of The Soldiers’ Charity. Each judge looks at how much each Detachment raises, the creativity in challenges and involvement with the wider community. The trophy, once presented, stays in the winning detachment for one year and is engraved with the winner’s name.

This year, the judges decided on a joint second place. This was awarded to the Tiverton Detachment (who had been defending this title for the past three years) and the Dunmurry Detachment.

The Tiverton Detachment raised a total of £4,436 by running a 7km Grinder obstacle course in 45 minutes whilst carrying a 50kg pole, taking part in a 40 hour Survival Challenge and helping The Soldiers’ Charity with collections at supermarkets.

The Dunmurry Detachment raised over £5,000. They achieved this by taking on brave challenges, from abseiling down the roof of the Europa hotel in Belfast (one of Northern Ireland’s tallest buildings) to bucket collecting at The Soldiers’ Charity’s D-Day 75th anniversary event at the Belfast Waterfront.

Well done to all the Cadet Detachments that took part in these exciting challenges and congratulations to the Hexham Detachment for taking the crown this year.

Brigadier (Ret’d) Robin Bacon, Chief of Staff at ABF The Soldiers’ Charity, added: “It is always a pleasure to see young talent using their skills to help the Army family and the charity in any way they can. Many congratulations to the new winners, and thank you to all the detachments that took part.”