Former soldier Adrian was diagnosed with Muscular Dystrophy in 2005. Thanks to a grant for a specialist standing wheelchair, he is now able to stand and kiss his wife Lucy again.

Adrian served in the Royal Anglian Regiment for nine years. He had wanted to be an infantry soldier from childhood: “I was a recruiting Sergeant’s dream,” He says. “I went into the recruiting office and said ‘I just want to go in the Army, in the infantry’.” Adrian served for six months in the Falklands in 1989, before undertaking two tours of Northern Ireland. He loved his time in the Army, saying: “All my life I was Army-barmy. My biggest regret was leaving.” 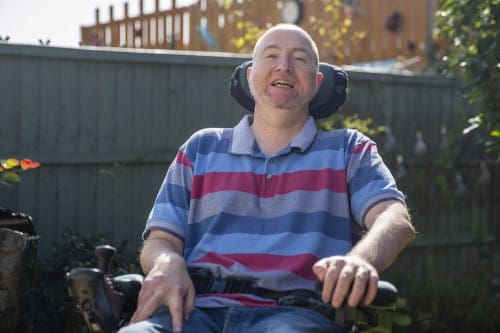 After leaving the Army, Adrian worked for various national institutions, including the Cabinet War Rooms, the National Army Museum and the Imperial War Museum. By this time, he was beginning to experience the symptoms of Muscular Dystrophy – a progressive muscle-weakening disease. In 2013, ill health forced him to give up work. 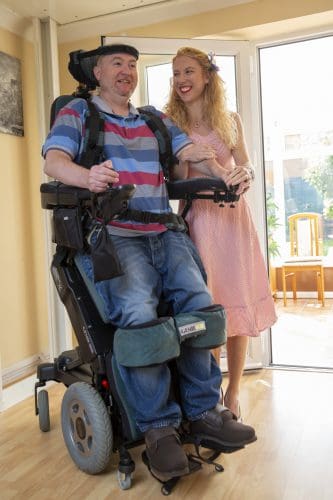 Adrian has become entirely dependent on a wheelchair. His limited mobility has put a strain on the family and left them increasingly restricted to the house. In 2019, Adrian and his wife Lucy applied to our charity for help purchasing a specialist standing wheelchair so that they could spend more time outdoors. The chair has transformed Adrian’s quality of life – enabling him to support and move his body for the first time in years. 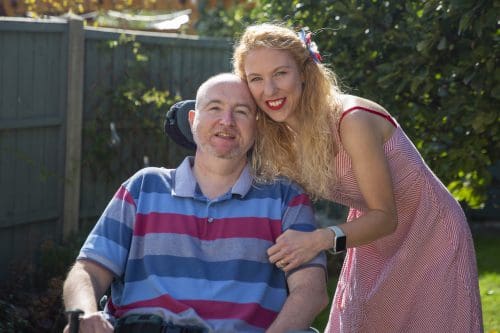 Lucy says: “The chair provides a form of physio, because it allows Adrian to stretch in a way he couldn’t otherwise. He can move himself between rooms, where before he was completely dependent on me.”

Adrian says: “I cannot explain the look of delight on Lucy’s face when I stood up for the first time in three years. I can finally stand up to kiss her again. Thank you so much to ABF The Soldiers’ Charity for giving me back my independence – I am looking forward to getting back out and enjoying life again.”