World War Two veteran Edwin (Ted) Hunt MVO was a waterman who served at the Battle of Narvik and Gold Beach on D-Day, where he commanded 15 of the Rhino ferries as a Captain. Now 102, Ted lives at Care for Veterans in Worthing, one of 66 charities we funded last year

Coming from a family of watermen, London-born Ted always knew what he wanted to do and began training as a Thames Waterman aged 15, learning how to tow Thames barges with a rowing boat up and down the river. As the Second World War was announced, he felt it was his duty to join other young men in defending his country. 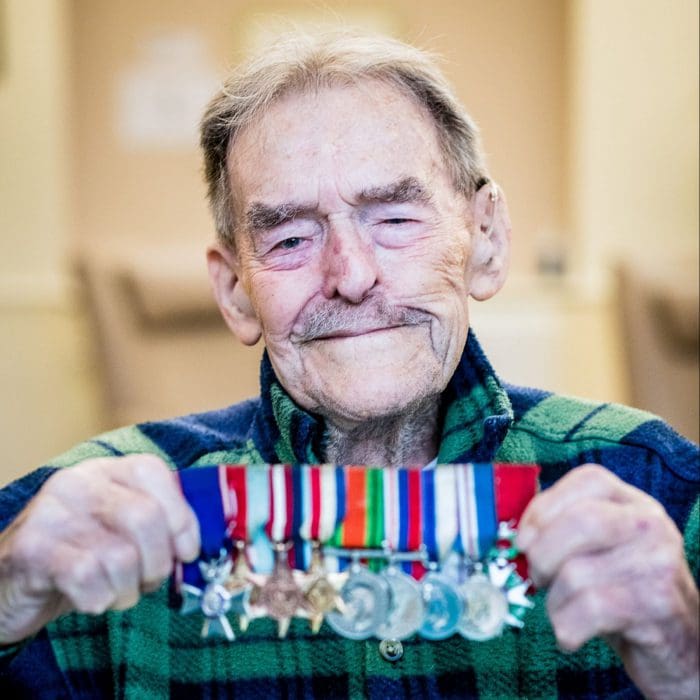 Ted noted how his fate in the Army has always had its stoke of luck. A month after the war broke out, he and his friends made their way to Surrey Docks to enlist, but he was turned away for being a year too young. Not willing to give up, he went back the next day and added a year to his age, and was let in. Ted explained how this was a blessing in disguise, saying: “I  joined on the 13th and I was sent to Norway. If I joined on the 12th, I would have been in a different company killed on the way from Dunkirk.”

Posted at the Battle of Narvik between April and May 1940, Ted was tasked with taking the port of Narvik from the Nazis. His company was ordered to clear the fields in nearby Evenskjer for planes to land. Each day, a single German bomber would come over the mountains opposite the fjord, aimed, and always missed. On the day the airstrip was finished, disaster struck. This time, another German plane attacked and hit the HMS Curlew which was guarding Ted’s force. A squadron of German Bombers were seen approaching. Ted says: “I thought I was going to die. I thought they couldn’t miss. But the Hurricanes came and they began fighting. I saw two planes brought down.” 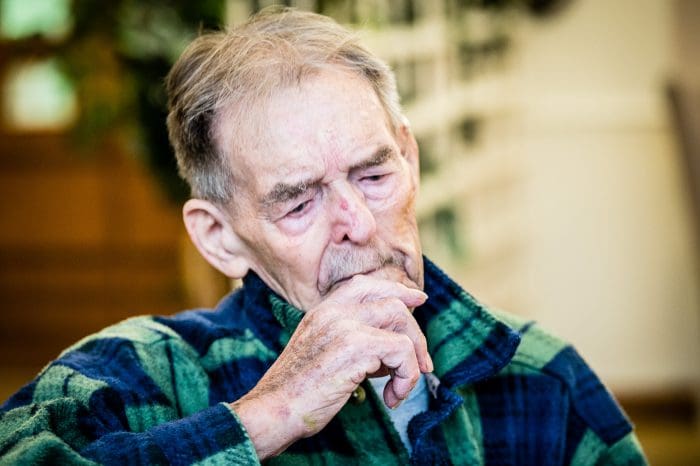 Narvik having been captured, Ted returned back to Scotland and helped build military ports across the country. He was soon after promoted to Captain and placed in charge of 15 Rhino ferries tasked with transporting vehicles to Gold Beach in the D- Day landings.

Ted speaks with awe about the planning that went into it:“These amazing machines were made up of 180 steel boxes’. When they hit mines they would only lose a few boxes and keep going. Of note, 70,000 mines on wooden logs along Normandy’s beaches had been placed by Nazi forces in occupied France.”

Once Ted’s force departed for Gold Beach, he experienced yet another incredible stroke of luck, after a shell splinter hit him in the forehead. He says: “Any lower and I would have been blind, any bigger and I wouldn’t be here”

After many years in the Army, Ted was promoted to Major and put in charge of a company before returning to London. In his later years, Ted taught navigation and watermanship at the City & East London college until 1985. As a Royal Waterman, Ted was appointed Queen’s Bargemaster in 1978; the first ever waterman to have this appointment. Retiring from Royal service in 1990, Ted was made a Member of the Royal Victorian Order.

Now a resident of Care for Veterans in Worthing, Ted shares his engrossing stories of service with other veterans from all walks of life. He says “The staff here cannot do enough for you. I am so well looked after and it is a pleasure to meet fellow veterans.”