The last few remaining veterans of the Korean War have come together, along with historian Sir Max Hastings, to remember the conflict in our new podcast to mark the 70th anniversary of the Battle of the Imjin River, which remains significant for South Koreans today.

When speaking to podcast host, Harry Bucknall, the veterans recall being part of a United Nations force dispatched to Korea in 1950 when the Communist North Korean forces invaded South Korea without warning. Many were involved in ferocious fighting in challenging conditions, with the Battle of the Imjin River (22nd-25th April 1951) being the bloodiest battle endured by the British Army since the Second World War.

Chinese forces attacked the British 29th Brigade, which was supported by Belgian forces along the Imjin River, on 22nd April 1951. Heavily outnumbered, troops of the 1st Battalion, Gloucestershire Regiment valiantly held their position for three days before they were forced to retreat amid heavy casualties.  527 men were taken as prisoners of war by the Chinese. 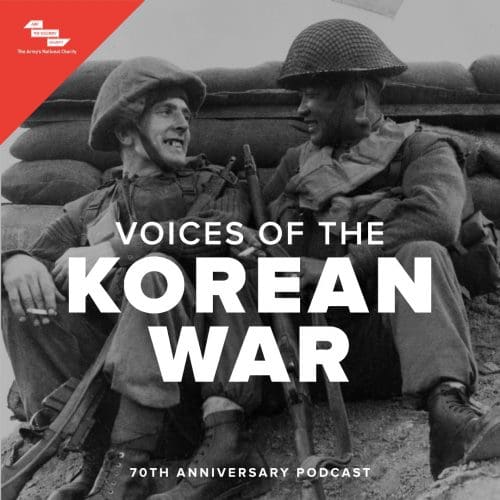 The stand of the Gloucestershire battalion – The Glorious Glosters – has become an important part of British military history and tradition; although at the time their endeavours were unappreciated back home.

Sir Max Hastings says: “A lot of veterans I’ve interviewed described their pain of getting letters from home saying the neighbours are all wondering if you’ve left me because they’ve no idea, they don’t believe there is such a thing as Korea or the war.”

Tommy Clough, now 90, was captured after the Battle of the Imjin River and was a prisoner of war for two and a half years:

“We took post on Hill 235 as infantry. They’d come in, in waves. The first wave would get mown down, the second wave would come in and pick up their weapons and use them.

“People say to me, ‘How did you manage; how did you hold it together?’ It was a question of Army discipline and camaraderie; you didn’t want to let your mates down. We held the main base, we held battalion HQ and we just kept mowing them down.”

Listen to more recollections of the Korean War here.