Army veterans follow the historical footsteps of Lawrence of Arabia on trek across the Wadi Rum desert whilst raising funds for soldiers, veterans and their families. 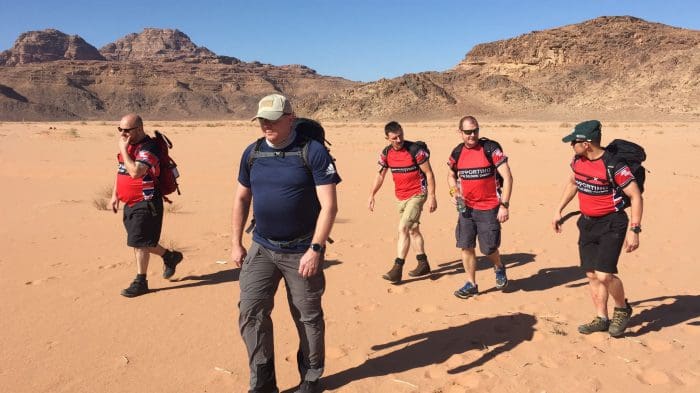 Earlier this month, our charity organised the Wadi Rum challenge with the help from our adventure partners, Tribal Tracks. A team of ten of our supporters from UK and US travelled to Jordan, where they took on a 100km trek of the gruelling Wadi Rum desert and granite mountains over the course of seven days. The challenge led them through the Seven Pillars of Wisdom, Um Fruth Bridge, and Jordan’s highest mountain – Um Dami, to the ancient city of Petra, taking in the striking views and uncovering fascinating history along the way.

During World War One, the legendary Colonel Thomas Edward Lawrence campaigned in this region of the Arabian Desert during The Arab Revolt against the Ottoman Turks. He was captivated by the majestic beauty of the Nabataean temples and tombs carved into the rock.

Despite being in the middle of the desert, our team of fundraisers still paid their respects on Remembrance Day and commemorated all those who have given their lives for their country by laying a wreath at the scene of Lawrence of Arabia’s famous World War One campaign.

Former army commando and dementia charity campaigner, Chris Graham, took part in the challenge this year. Chris was diagnosed with early-onset Alzheimer’s in 2010 at the age of just 34, which prematurely ended his army career. Since then, he has campaigned to raise awareness of the disease and fundraised for various charities, including his “Dementia Adventure” in 2015, which involved a solitary bike ride across 16,000 miles of North America.

Thrilled with the outcome of this year’s trek, team leader Pete Davies, our charity’s Regional Director of Wales, said:

“This was a tough challenge and a rewarding experience for all of us. It was also exciting to visit the place where the Lawrence of Arabia legend was born during the First World War. I’m immensely proud of everyone in the team, especially Chris whom I’ve known a long time since we served together in the British Army.”

We would like to congratulate our team of adventurers for completing the Wadi Rum challenge and managing to raise a total of £23,920.00 in support of our charity. Their efforts and dedication allows us to fulfil our promise of being there for soldiers, veterans and their families for life.