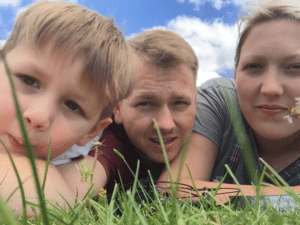 X-Forces, a social enterprise that nurtures entrepreneurial ambition in the UK military community, has given out it’s 1,000th supporting grant since its launch just four years ago. The lucky recipient of X-Forces’ latest grant was Lee Harris-Hamer, owner of White Horse Cleaning Company Ltd, based in Thirsk, North Yorkshire. In just 13 short months, Lee has grown White Horse into a professional, flexible and reliable cleaning company, with services ranging from domestic and commercial cleaning to end of tenancy services.

Lee joined the Royal Artillery in 2008 as he wanted to gain life skills, job security, and see the world. He was deployed to Afghanistan in 2010 and again in 2012, but was later discharged on medical grounds with a back injury and mental ill health.

After leaving the Army, Lee felt as though he was without skills. He had lost his job and nearly lost his home and family, but he knew he was good at cleaning, so he started a small carpet-cleaning business.

Lee came to X-Forces with plans to grow his business. He attended an X-Forces one-day ‘Introduction to Business Skills’ course – a programme supported by ABF The Soldiers’ Charity – and soon after, applied for and received an X-Forces expansion loan. Lee now works with a 16-strong team who provide a complete cleaning service in North Yorkshire and the surrounding area.

Commenting on our Charity’s support to veterans like Lee, through our funding of specialist organisations such as X-Forces, Brigadier (Ret’d) Robin Bacon, Chief of Staff ABF The Soldiers’ Charity said: “I’m delighted to see X-Forces reach this fantastic milestone and wish Lee all the very best with the expansion of his business. The Soldiers’ Charity is extremely proud to help those who are leaving the Army with that next step in the business world, in order to provide them with the necessary skills they need to give them a head start.”

X-Forces CEO Ren Kapur added: “Transitioning out of the Forces and starting a business are often difficult times for entrepreneurs and their families, but you do not need to be in it on your own; there are organisations like us and The Soldiers’ Charity there to support you. Lee is the ideal candidate to be promoted to our ‘Big Business supporting Small Business’ mentoring programme, so we can help him gain additional contracts.”

Lee now aims to share his skills and experience with other veterans who have had a similar experience to him. He is a keen mentor, having previously taught life-skills to schoolchildren with autism, and feels mentoring is a fantastic way to give something back.